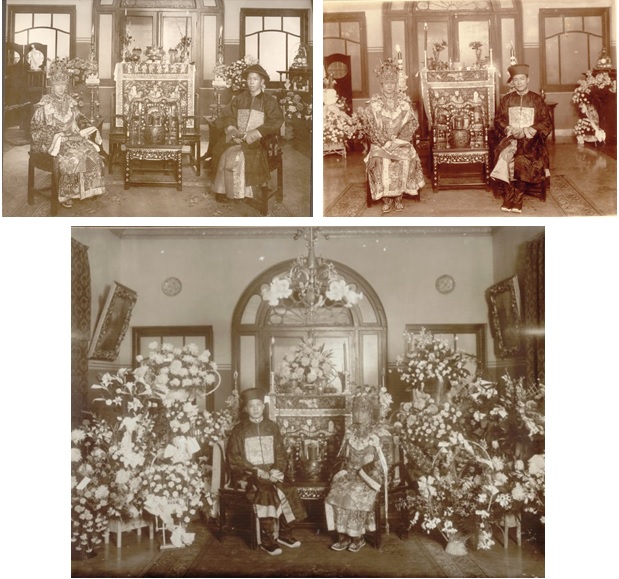 This photographs come from the collection of Mr. Sioe Yao Kan, and you can read the story in the category “Foto met Verhaal” (number 18) ‘The bridal costume of grandma Tan Tjoen Lee (Han Tek Nio)’

The altar behind the bridal couple is known as the meja samkai; it is an elevated altar – as seen in the top-left photograph, the altar table was raised on chairs. The altar dedicated to Thi-kong (天公), the god of the “Heaven, Earth and Man”, known in the Hokkian/Fujian (福建) dialect as samkai (三界), meaning “three realms”.

This altar was specially erected for the wedding and had a prominent role during the wedding rituals – the most important being the ciotao (梳头), a purification rite of passage performed on the eve or early morning of the wedding day. This rite was considered most sacred.

The objects needed for ciotao were most probably placed in the gantang found on the chair between the bride and groom – a gantang is a wooden circular tub for measuring one gantang, or the equivalent of 2.8kg or 4 cupaks, of padi or unhusked rice. Gantang and cupak were units of measurements in the Malay world.

The ritual objects would usually include a comb, a pair of scissors, a razor, a small mirror, a pair of Chinese scales, a wooden ruler, a tungshu (通書) or Chinese almanac, and other items according to the local tradition. These objects were used to remind the couple of the virtues needed for a good marriage. For example, the scales are a reminder for one to be fair and just; and the mirror is to remind one to reflect on one’s past actions, that is, the need for discernment in all matters.

Such temporary altars were traditionally placed at the front entrance of the house and were often decorated on both sides with richly-embroidered Chinese cloths in silk and gold threads known as tokwi (桌围). Indonesian-made ones were often of cotton and from batik ateliers in Javanese towns such as Pekalongan or Cirebon.

The other occasion when samkai altars are erected is on the eve of 9th day of the Lunar New Year for special prayers to Thi-Kong.