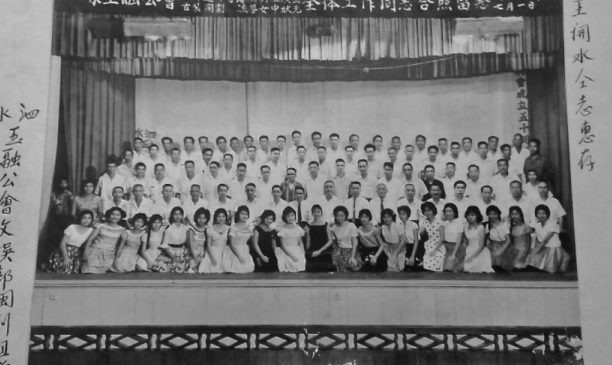 Photo courtesy of Sayfudin Endo with permission from owner of photo.

Driven by poverty and political turmoil in China in the 19th and early 20th centuries, many Chinese, predominantly from the coastal provinces of Fujian and Guangdong in southern China, migrated to Indonesia and other parts of Southeast Asia to find a better life.  During this period, these immigrants often formed “clan associations” to provide help and support for their communities.  These associations were organised based on dialect, origin, or surname.

This photograph was taken on 1 July 1962 to commemorate the 50th anniversary of the Hokchia Association of Surabaya; a Chinese opera was staged as part of the celebrations.  Members of this association could trace their ancestry to Fuqing, one of the seven dialects of Hokchia people.

Hokchia people, also known as Hokchiu people, are from the territories of Fuzhou, the capital city of Fujian province; they speak dialects known as Mindong, or Eastern Min.

Hokkien people in Indonesia and Southeast Asia also came from Fujian province but from the territories of Zhangzhou (also known as Chinchew), Quanzhou (or Zaiton), and Xiamen (or Amoy); the dialects spoken are known as Minnan, or Southern Min.