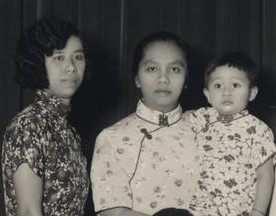 The “cheongsam” or “qipao” is a modernised version of the “changpao”, a Manchurian one-piece dress.

Earlier versions in the 1910s were straight and loosely cut. With changing attitudes and social norms, the dress became tighter and more revealing to enhance the silhouette of the body in the 1920s.

The dress was very popular with socialites and celebrities in Shanghai. One of them was Madame Wellington Koo née Oei Hui-Lan, daughter of Oei Tiong Ham.

This dress, more commonly known as “Shanghai dress” in Dutch East Indies, was initially worn at formal and festive events. Various styles according to one’s desire emerged – there were variations in the length of the dress and sleeves, height of the collar, and materials used.