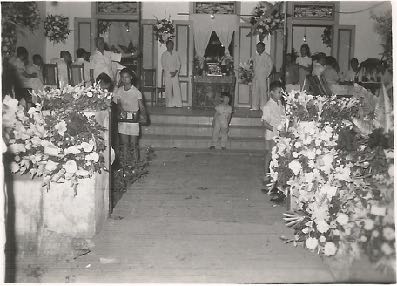 A continuous wake was held as long as the coffin was in the house. The wake often lasted 5 or 7 days but could last even longer for those with considerable wealth and status. The date and time of important rites were determined by the astrologer and strictly followed to ensure the well-being of not only the deceased, but also the living.

Relatives and acquaintances could attend the wake at any time of the day but most went to wakes during the evenings. Food and beverages were served to the visitors, and there were often opportunities for visitors to play card games. Members of the family kept the nightly vigil.

There was sometimes a small Chinese orchestra of clarinet, flute, fiddle, gongs and cymbals called “pat im” (⼋⾳) during the wake. The clarinet had a distinctive wailing sound, which gave a tinge sadness to the ambiance. The presence of such an orchestra often was regarded as an indication of a traditional funeral.

The photo shows a boy serving drinks to the guests at a wake. A small offering table could be seen at the main entrance to the residence. The table was decorated with a “tokwi” (桌围) or altar frontal; the main entrance was draped with a pair of white curtains. Guests were seated at long tables at the verandah. The foreground was filled with wreaths from well-wishers.