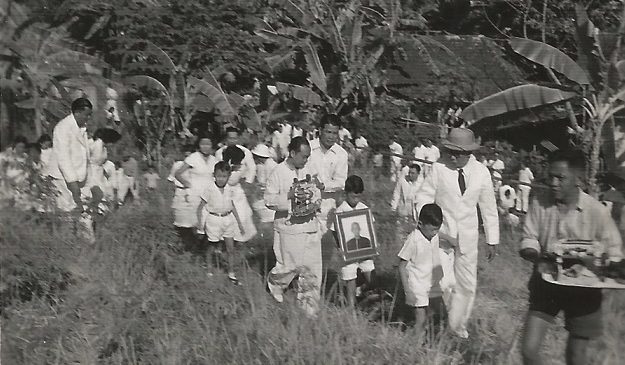 Final rites were usually performed by a master of ceremony at the burial site. The position of the coffin in the grave was of utmost importance from the point of Chinese geomancy (风⽔) for the well-being of both the dead and the living. When the coffin was rightfully placed, the family of the deceased would throw earth on the coffin. Some mourners preferred to throw flowers instead

One of the rituals at the burial site was “penyebaran ngokok”. “Penyebaran” in Indonesian means “scatter”, while “ngokok” (五⾕) means “five kinds of grains” in the Hokkien dialect. The master of ceremony would throw grains at the children of the deceased who would be holding out their clothings to collect them. The collected seeds were scattered on the burial site a few days later, signifying the end of period of “heavy mourning”. This ritual was to ensure the continuation of the family line through many descendants symbolised by the many grains. “Penyebaran ngokok” is also known as “penyebaran bibit”; “bibit” in Indonesian means “seeds”.