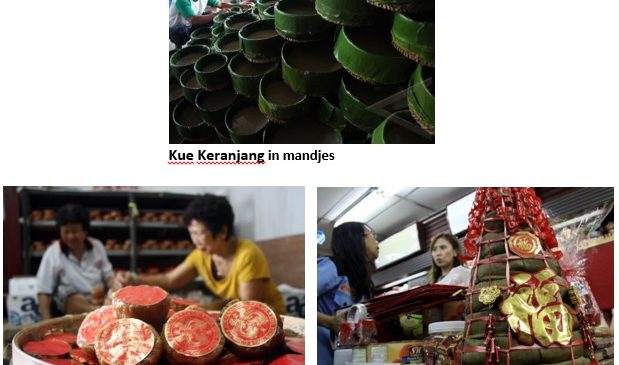 Chinese New Year, or Lunar New Year, is known as “Sincia” or “Tahun Baru Imlek” among Chinese Indonesians. One of the foods associated with Chinese New Year is “kue keranjang” or “kue cina”. It is a chewy and sticky cake made with only two ingredients – namely, refined sugar and finely ground wet glutinous rice. Traditionally, the batter is poured into woven bamboo baskets lined with layers of banana leaves, then steamed for up to 14 hours until the cake caramelises and becomes golden brown. Nowadays, it is not uncommon for banana leaves and bamboo baskets to be replaced by plastic sheets and containers (see this FILM)

These cakes were originally made as offerings for the prayers on the 24th day of the 12th lunar month, which is a week before Chinese New Year. This was the day when the Kitchen god made his ascension to submit his annual report to the God of Heaven on the conduct of the mortals at each household. In order to influence the report positively and to ensure that only favourable words would pour out of his mouth, sweet delicacies including “kue keranjang” would be offered to him. Sometimes, these cakes would be stacked high into a pyramid and decorated with red papers. These cakes symbolise the hope of continual promotion, improvement and success.

Kue keranjang is also found in Singapore and Malaysia, where they are known as “nian gao” (年糕) in Mandarin, “ti kueh” (甜棵) in Hokkien and “kueh bakol” in Malay. According to tradition, these cakes are not eaten until after Cap Go Meh or the 15th day of the Lunar New Year. These cakes are most commonly steamed and served with grated coconut, or fried in batter before consumption.