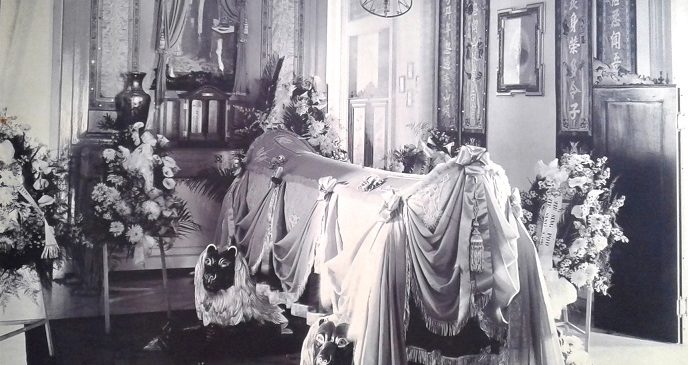 Wakes were traditionally held at the residence of the deceased. When death occurs, the deceased was first given a ritual cleansing then dressed. For those particularly traditional, an outer garment known as “siusah” (寿衫), or “longevity garment”, was included. Only adults were allowed to be dressed in these elaborately embroidered Chinese-style jackets. The body was then placed in a coffin, also known as “siupan” (寿板), which literally means “longevity board”.

The coffin was often placed in the main room of the house, with the feet of the deceased pointing towards the main door. A small table with the photograph of the deceased, a “hiolo” (⾹爐) or joss-stick holder, a pair of candles and perhaps some offerings were often placed before the coffin. The place of repose was often decorated with flowers sent by relatives, friends and acquaintances. The coffin was sometimes covered with an embroidered Chinese coffin cover, often in sombre colours of blues, greens and purple. Sometimes, the coffin was decorated with flowers but most often it was kept bare.

The photo shows a unique blend of cultures – a traditional, Chinese-style coffin made of hardwood dressed in layers of Western-style drapes with frills and rosettes, positioned in front of an ancestral altar. The coffin, which rested on curious coffin stands of couching tigers, was in a room with a mix of elements from the East and West. Nonetheless, beyond outward appearances, traditional funeral rites were fundamentally Chinese with influences from Confucianism, Taoism and Buddhism, reflecting the psyche of the Chinese.