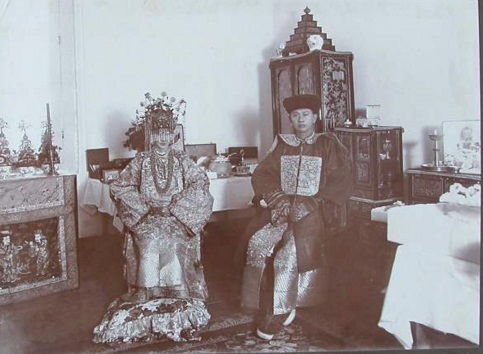 The photograph shows a bridal couple dressed in traditional costumes seated in their bridal chamber. Behind the groom on his right was a wardrobe for storing articles of clothing. On top of the wardrobe was a pyramidal chest of drawers for keeping jewellery. Next to the wardrobe was a “perfume cabinet” for keeping toiletries, and next to the “perfume cabinet” was a dresser. These 4 pieces of furniture, most probably of teak, were locally constructed, carved and decorated with gold leaf. They were probably part of a larger set of bridal furniture. The bridal bed, for example, was not captured in the photograph. Gifts for the bridal couple were displayed on the tables covered white linens.

One of the nuptial rituals was the partaking of the first meal as a couple. A table with several kinds of delicacies would be placed in the bridal chamber. The photograph shows a very elaborate example. The table was decorated an embroidered silk altar frontal and a pair of candlesticks, with bowls of delicacies of fruit and cakes arranged neatly into pyramids. The couple would partake the food and drink symbolically by just touching the food and lips with their chopsticks; they would at most take very small morsels of food and tiny sips of wine.