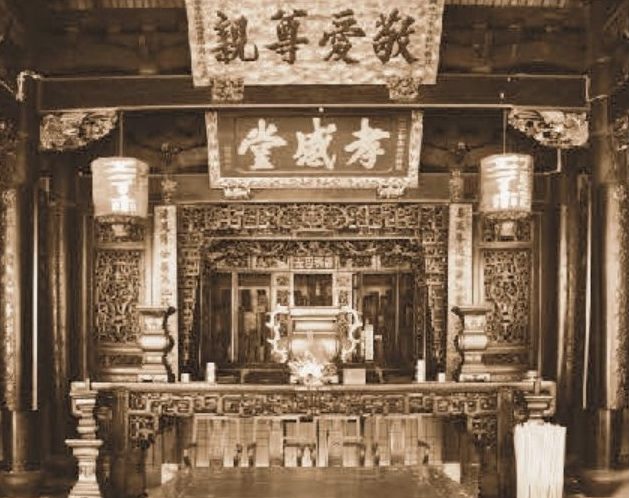 A “sinci” (神主) or ancestral tablet was regarded as a home for the soul of a deceased person after burial. They were often made of three pieces of wood – a stand and two upright, rectangular planks, one in front of the other. The name of the deceased would be carved on the front side in Chinese characters, together with genealogical information such as the names of spouse and descendants. Additional information, such as burial place, was sometimes written on the back of the tablet or kept in a compartment within the tablet. Ancestral tablets are invaluable for those who are trying to trace their roots.

Ancestral tablets were often enshrined in an altar at the residence of the eldest son. It is his responsibility to ensure joss sticks are offered daily, and arrange more elaborate offerings on feast days and important occasions such as birth and death anniversaries of the dead. These are necessary to keep the ancestors happy, for this is important for the well-being of the living. It is not uncommon for ancestral tablets to be enshrined in a temple for it is often not easy to fulfil the required obligations; other reasons included religious conversion or simply the absence of a domestic ancestral altar.

The photograph shows the “Hall of Filial Piety and Thanksgiving” (孝感堂) found in the middle section of a temple in Semarang. Ancestral tablets of various families are enshrined and venerated in this hall as seen behind the huge incense burner. The topmost signboard reads 敬愛存親, reminding visitors “to respect, love and cherish [their] parents”. The two lanterns flanking the shrine containing ancestral tablets bear the name of the temple, “Kong Tik Soe” (功德祠), which means “Temple of Virtuous Works”. It is the duty of the living to perform “kong tik” for the souls of their deceased relatives.

NB: Unfortunately on March 2019 the Kong Tik Soe-temple was destoyed by a fire.