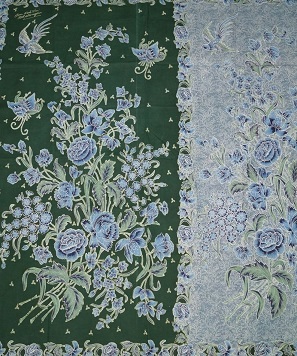 According to tradition, there are 5 types of mourning periods to mark the passing of the deceased:
24 months (often referred to as “three years”); 12 months (referred to as “one year”); 100 days; 40 days; and 7 days.

The main factor which determine the length of the period of mourning are the kin relationship to the deceased. Thus, the greatest obligation to observe mourning is of children for their parents, and of a married woman for her husband’s parents. The mourning period was often the longest, viz. 24 months. Distant cousins, for example, often mourned the shortest.

In the past, there were strict conventions related to clothing. The general rule was that no clothes with colours red, yellow and brown were worn. So, no brown shoes and belts, too! Purple was often forbidden as there is red in it; green was also not allowed in the first 12 months, as there is yellow in it. For women who wore sarong-kebaya, special mourning sarongs were acquired – blue and white ones for the first 12 months; and a combination of blue and green for the latter 12 months.

There was also a prohibition on gold jewellery because of its yellow colour. Any jewellery worn would be of silver. The only exception was the plain gold wedding band.