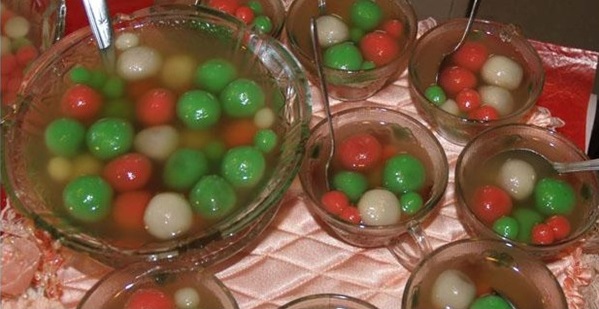 The Winter Solstice Festival is one of the festivals celebrated by the Chinese towards the end of the lunar calendar year. Known as “Dongzhi” (冬至) in Chinese, this festival usually falls either on 21 or 22 December, coinciding with the longest night and shortest day of the year. Incidentally, this is the only festival which has a fixed date – all other Chinese festivals have movable dates on the Gregorian calendar since the dates are determined by the movement of the moon instead of the sun.

For overseas Chinese with ancestry from Southern China, this festival is often associated with the making and eating of “tangyuan” (湯圓). These are spherical, marble-sized dumplings made of glutinous rice flour served warm in diluted syrup. The dumplings, made with or without filling, are thought to represent the hope for unity and harmony in the family.

Among the Indonesian Chinese, this dish is known as “Kue Ondé” or “Kue Rondé”. 3 Chinese teacups filled with these dumplings are offered on household altars on this day. As such, this festival is commonly known as “Sembahyang Ondé” or “Sembahyang Rondé”; however, some would prefer to use the traditional Hokkien term, “Tang Ce”. The dumplings in Indonesia were originally made without filling in white, red and green, and served in small bowls with ginger-flavoured syrup. Nowadays, they come in various colours, often with a sweet filling made of roasted peanuts.

These dumplings play an important role during wedding rituals as they are also considered as a symbol of union and posterity. One of the rituals involves the bride and groom feeding each other these dumplings… not the whole bowl but only 2 dumplings… just a red and a white.