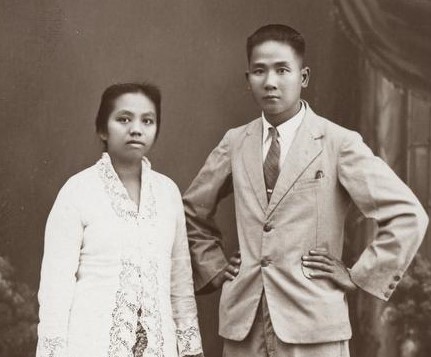 The white lace kebaya was a mid-19th century European invention – it was a shortened version of the “baju panjang” worn with a “batik Belanda” sarong.

Known as “kebaya Belanda”, it was exclusive to the Europeans and Eurasians and became associated with prestige and privilege. When non-Europeans were no longer restricted in their choice of attire in the 1910s, Chinese women began to wear their version of “kebaya Belanda”.

Known as “kebaya encim”, these had long, slanted frontal hems with pointed tips but remained white, even though it was the colour of deepest mourning for the Chinese.

Versions from the 1930s were made of coloured voile and decorated with free-motion sewing machine embroidery.

Elaborate ones were trimmed with European lace and worn with fine, colourful batik sarongs from Peranakan ateliers. Simple versions were worn at home.

Kebayas and sarongs lost their popularity among Eurasians and Europeans in the 1920s. They were considered too “local” and quickly became out of place in the colonial public space.