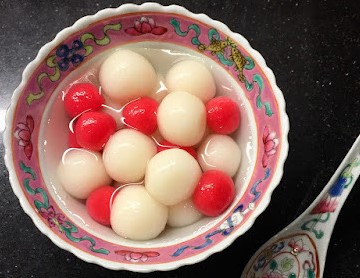 Among those who follow traditions, the six most important Chinese festivals are:

Winter Solstice, known as “Tang Ce”, falls either on 21 or 22 December. On this day, spherical
dumplings made of glutinous rice flour served in a gingery syrup known as “kue ondé/rondé” are
eaten to celebrate the start of winter and the passing of the longest night of the year. The practice of
using ginger to warm the body continued in tropics even though it never gets wintery cold in
Indonesia.

It is believed one becomes one year older after eating “kue ondé/rondé”. In traditional Chinese age
reckoning, a person’s numerical age is based not on the birthday but on the calendar year. Eating
“kue ondé/rondé” during the shortest day of the year saves one the wait till the first day of the new
year. Age is culturally valued for the Chinese and considered as a sign of wisdom and life
experience.

Preparations for Chinese New Year often start after this day. These include cleaning and decorating
the house; baking cakes and biscuits; and getting new clothes.