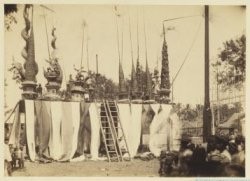 It is believed that the gates of hell would be opened and spirits of the dead would visit the living world in the seventh lunar month of the Chinese calendar. During this month, spirits would go home to visit their families. Families would often make offerings of dishes, fruits and cakes at the ancestral altars. Bowls of rice, often two for each ancestor plus an additional number for the ancestors’ friends, and an equal number of tea and wine would be part of the offering. Such domestic offerings may be made any day during the month. This practice is known as “Sembayang Cioko”.

Some spirits have no families and would roam on the streets to seek food and entertainment. According to custom, these neglected spirits could get up to mischief if ignored, so all sorts of offerings are made during this period. Often on the 15th day of the month, a special public offering organised by temples or associations with huge offerings of rice, whole animals, dishes, fruits, cakes and joss paper would be made. Long ago, such offerings were given to the poor, and people would grab whatever they could lay their hands on. Hence, this offering is also called “Sembayang Rebutan” – the word “rebutan” comes from the Indonesian verb “rebut”, which means “to grab”.

The lunar seventh month lasts from 14 August to 12 September this year, with the 15th day falling on 28 August.