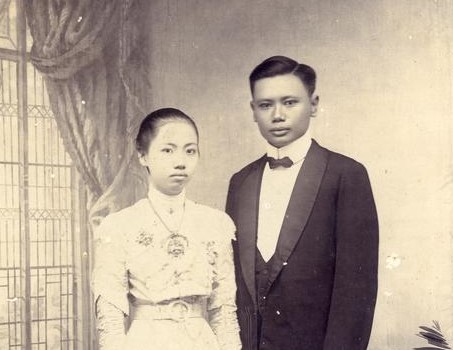 Snippet of a couple in Western-style clothing. Surabaya, around 1910. KITLV 124837. See whole image below

In late 19th century, some Chinese were legally “equalised” which meant they received equal rights as Europeans and thus the privilege to also dress like them.

Men could choose to be dressed in the “jas tutup”, a uniform-like jacket with standing collar that asserted a masculine air of confidence and colonial superiority. This was the standard costume of Dutch government officials, business men, teachers, soldiers and police. For formal occasions, European dinner jackets, waist coats and bow ties were worn.

Some women turned out in European-cut gowns at formal events. The gowns were generally a twopiece ensemble. The habit of wearing two-piece attire by Han Chinese came from the Qing government, for the privilege of wearing one-piece dresses was strictly reserved for Manchurians.

In 1910, “Foreign Orientals” in the Dutch East Indies were considered Dutch subjects and the Chinese were no longer restricted in their choice of attire. Many adopted Western-style clothes and traditional clothes became “modernised”.