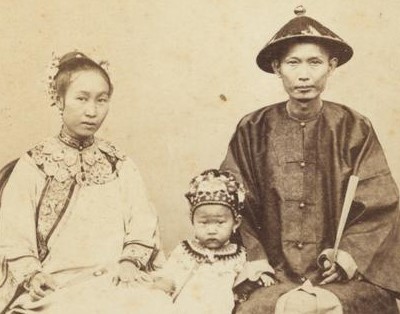 Such clothing were also worn by Chinese officials at formal situations. Men used the Manchurian attire of the Qing government – a long robe with long sleeves.

There was a variety of codes that show the rank and position of the wearer. The most obvious was the “Mandarin square” on the chest.

Another way to display social standing was the use of colourful hat knobs and feathers. Peacock feathers, for example, were usually worn by high-ranking officials.

Women wore a jacket with wide sleeves and a panelled skirt. The jacket was often topped with a “cloud collar”, a small cape of overlapping flaps worn over the shoulders. These brightly-coloured silk robes were embroidered in silk floss and gold threads with auspicious motifs.