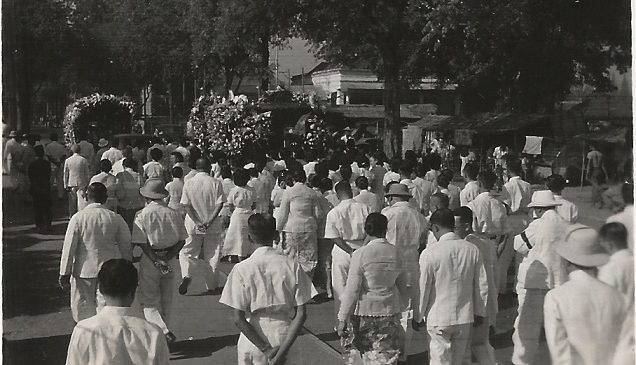 The colour for “deepest mourning” for the Chinese is white – this is the period from the moment of death until a few days after the burial. Other mourning colours in order of decreasing severity are black, blue and green. The type and colour of dress worn during the funeral procession would usually indicate the degree of kinship with the deceased.

For the immediate family, children of the deceased were traditionally dressed in off-white clothes made of coarse known as “kain blacu” – these are the clothes of deepest mourning. Children of sons were dressed likewise, but children of daughters were often in blue. Other male relatives of the deceased often wore all white or a combination of white and black. Female relatives when in traditional dress wore white kebayas with simple embroidery as seen in the photograph. The sarongs worn were in mourning colours of blue and white, sometimes with green accents dependent on the degree of relation.

Westernised or modern families often only observed the colour code, with those in deepest mourning in all white though accessories could be in black.

The other mourners were allowed to wear any colour except bright and bold ones. Reds and orange were often avoided. It was sometimes customary for some to wear a cloth band on their arms as a sign of respect as seen in the man with the hat at the lower right in the photograph. The arm on which the band is worn depends on the gender of the deceased. The band is worn on the left sleeve when the deceased is male, and on the right when the deceased is female. This follows the Chinese custom of “男左⼥右”, or “men left, women right”.