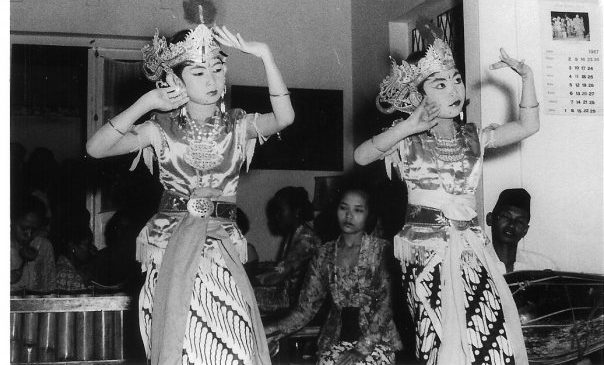 I lived on a multi-cultural street in Surabaya. I can still recall some of the children’s names: Ita Sutomo, Tan Ay Ling, Rini Maryani, Kiki Darsono, Annie en Jaatje bin Haider, Nanik, and many others.

We played happily together, and not a day would go by that we would not be together. We did not take notice of our race or cultural differences. These things were never an issue for us, and we enjoyed each other’s company. Notions such as culture and race were experienced as positive and enriching.

When a course in Javanese dance was offered on our street in 1964, Jaatje, Rini, Nanik and I – curious and eager to learn — signed up. We learned to dance the Srimpi and Bondan. All of us worked very hard, as the reward would be that the best pupils get to perform.

Ultimately, Nani and I performed the Srimpi (see photo left), while Rini and Jaatje danced the Bondan. I was proud as a peacock!

Alas, politics reared its ugly head, and race gradually did became an issue. In my memory, this started to take shape in 1965. This was all very confusing in the eyes of an eight-year old child, not in the least when our family decided to move to the Netherlands.

The confusion did not subside as I had to adjust to Dutch culture. Barely four months after our arrival, my new friends persuaded me to join in the Carnival.

“Put on a boerenkiel(*) and just act crazy,” was their motto. While it was weird enough that a Chinese girl from Indonesia puts on a “boerenkiel”, I decided to add a little something to my costume.

And … this was the result! (see photo right)

Does one call this acculturation or cultural confusion?

(*)Boerenkiel is a traditional Dutch farmer’s smock frock: a frock or shirt worn over farmworkers’ clothing.