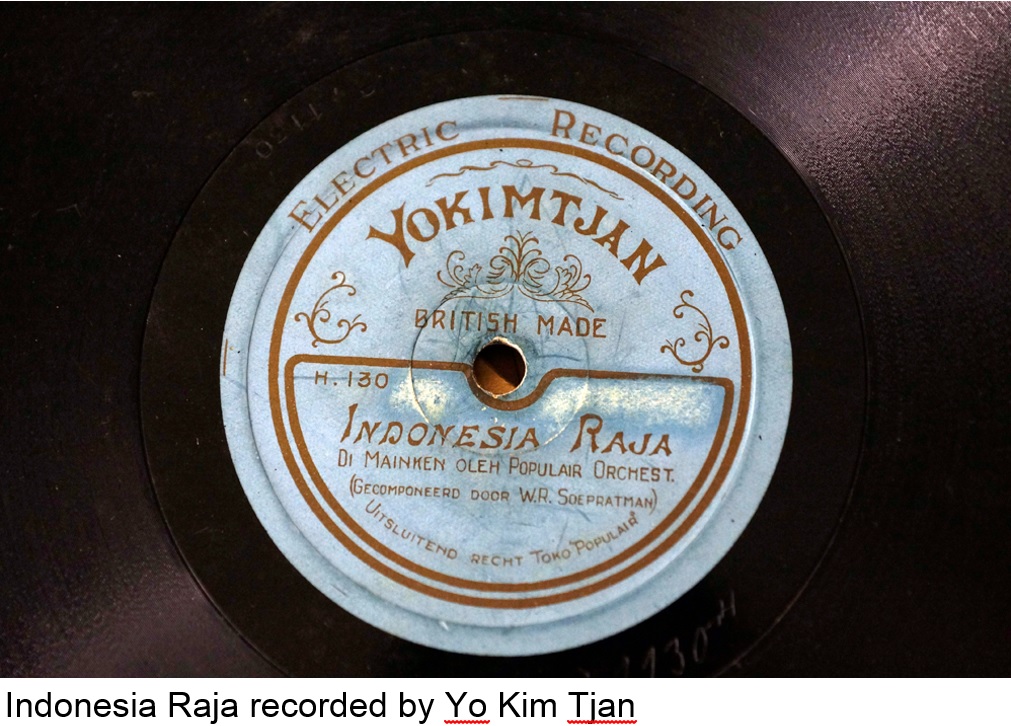 About three years ago I visited Mr. Haryanto Sanusi, a good friend of mine whose hobby is collecting all kinds of books and his collection of thousands of old books comprises many rare historical books. He presented me with an old, dirty and dusty record of Indonesia Raya. After I restored and cleaned the record it turned out to be the official version of the Indonesian national anthem, I believe recorded after 1950s

To fulfill my curiosity, I then tried to dig up further the history behind the record, searching any sources including YouTube, eBay etc. From YouTube I found two videos of the Indonesia Raya song. The first is the 3 stanzas version (which was claimed by the ex-minister of Youth and Sports of R.I. Mr. Roy Suryo four years ago to be the original of the national anthem). When my friend Mona Lohanda came with a visiting Professor from Tokyo University I discussed about the song and she confirmed that the 3 stanzas version was prepared during the Japanese occupation.

Then I found another version on YouTube: the keroncong version recorded by Yo Kim Tjan. The video also showed the news in the Kompas daily paper. I tried to find links from the article. The title was “Indonesia Raya Raib dari Pasar Baru” and it was published on SENIN 29 JANUARI 2001. I met the former CEO of Kompas paper in a meeting with the Governor of Banten in Serang so I asked him to help me send the soft copy of the article. A few days later I received the text of the article so I could read clearly the story and got a clear clue that the key person to get the information was Ms. Kartika, the daughter of Mr. Yo Kim Tjan. So I began my hunting to find the whereabouts of Ibu Kartika. It was not easy to do so as no historians I know knew her. Early October I attended a get together of Global Compact Network.

The meeting was at an old historical school named “Hati Sutji”, a social foundation established 100 years ago during the 1920s by a famous Chinese lady Ouw Tjoe Lan, the wife of Capitan Lie Tjian Tjoen in Batavia. The building has been used to accommodate unwanted children and orphans and provide them with shelter and education. After the meeting I chit-chatted with Mr Joseph Go (Josep Dharmabrata), the nephew of the famous Dr. Kho Tjok Khing, whose wife Nonnie Go Pheek Bwee was the caretaker of the foundation and Godmother of all the children in the premises. Knowing that his foundation had been celebrating its 100 years anniversary, I was sure that he must know lots of people from the past. When I mentioned the name of Yo Kim Tjan, he convinced me that he knew him well, that he in fact was still related to YKT and gave me a number to contact tante KWATTA, the nick name of tante GWAT or Ibu KARTIKA (YO HOEY GWAT).

On the way home in the car I called the number and from the other end I heard a loud voice, clearly saying that she was Ibu KARTIKA. So I made an appointment to visit her the next day. 15 October 2014 I came to her house, which was located behind Harapan Kita Hospital, at Tomang area, with three different record players; a very old one, made in 1926, a modern one and another one that can copy directly to USB. I began my interview with two cameras recording the conversation. Tante Kartika began to tell the whole story and I was amazed to find how her memory was still so sharp and her voice was so loud though full of hidden emotion. In 1927, WR Soepratman tried to contact a few recording companies in Batavia to record his music of Indonesia Raya, first he contacted Odeon and was rejected. Then he approached Thio Tek Hong NV. Again, Mr. Thio refused as he did not want to take the risk of being arrested by the Belanda.

Soepratman then asked Mr Yo Kim Tjan to help him record the song, Mr. Yo agreed but suggested that they recorded two versions: the original version of Soepratman singing the song whilst playing a violin and the keroncong version. Soepratman at that time also worked as a part time violinist for Mr Yo Kim Tjan’s Orkes Populair. Mr. YKT was also the owner of Roxi Cinema House as well as Lido in Tanjung Periok, made a lot of films and produced records. Mr. YKT proposed to record the keroncong version and to sell it to the public, so that all Indonesians would know the tune when one day it became the national anthem, whilst secretly keeping the original version. With the help of a German technician, Mr YKT secretly did the recording at his house at Jalan Gunung Sahari 37, Batavia. He then sent the master of the keroncong version to the UK to be multiplied and imported back to Batavia to be sold in his shops in Batavia and other cities as well. The one that WR Soepratman sang was kept in a pressed master on a white plate and kept in a secret place. Apparently after WR Soepratman sang Indonesia Raya on the Youth Congress on 28th October 1928, the Dutch colonial government smelt the movement for independence among the Nationalist elites and confiscated all the records of the keroncong version, including those on the way to Batavia. The master of the keroncong version was perhaps destroyed as well. During the Japanese occupation, Mrs Kartika who was 16 years of age at that time, remembers the message from Soepratman to secure the master till Independence day, Kartika took it with her and kept it carefully during evacuations to Kerawang, Tasik and Garut etc. In 1947 Yo Kim Tjan and his family traveled to Holland and were having dinner in a Chinese Indonesian restaurant in Amsterdam. Knowing that the guests were Indonesians, the owner of the restaurant played keroncong music to entertain and Mr. YKT had a pleasant surprise the moment he heard his Indonesia Raya was played in keroncong. He convinced the owner of the restaurant that it was his recorded music and showed his passport to check if the name of the recording company was the same with his! At the end he pleaded to buy the record. So he paid 15 guilders for his lost music ! He was so thrilled to get back his lost treasure. Now he could match the two records again. After independence, in 1953, Mr YKT wanted to reproduce the record so he approached the person in authority, at that time Maladi, but his application to be allowed to produce the copies of the records was rejected.

In 1957 Mr Kusbini, a song writer, approached Mr. YKT and told him that he could help obtain the copy right license to reproduce the records so Mr. YKT handed the record to him. But Kusbini gave it to the authorities and in 1958 Mr. YKT got a letter as if he surrendered the master of the record voluntarily. He was not happy because he did not handed in the master but lent it with the request to complete his application. That is the story of the loss of the historical and precious property that belonged to Mr. YKT. It was not surrendered, but it was confiscated !

I came to St. Carolus Hospital where her body was laid and put her photo, holding the record of Indonesia Raya. In fact I prepared the photo to show my respect and gratitude to her story so that she could hang it on the wall of her house but instead, I PUT IT IN FRONT OF HER COFFIN, bowing my body in full respect according our Chinese culture with tears in my eyes and a deep regret that my recording was not complete. Now I hardened my heart that the mystery of INDONESIA RAYA must be revealed at whatever cost! I PRESENT THIS STORY FOR THE 70TH BIRTHDAY OF THE REPUBLIC OF INDONESIA.