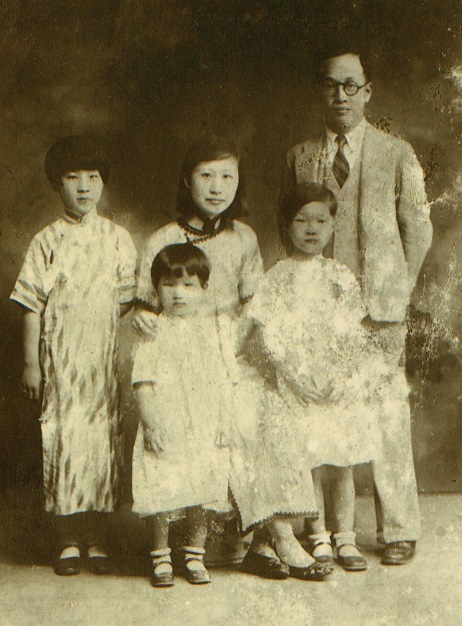 Susan Tjen, second from left
(Susan Tjen, daughter of a Chinese diplomat, spent a large part of her childhood in Medan, in the 1930s)

When I was seven years old, I lived with my parents and my sisters, Helen and Janet, in Nanjing, which was the capital of China at the time. I am the second of three daughters. My father was a civil servant at the Ministry of Foreign Affairs. He was sent to Medan, in the former Netherlands-Indies, to take up the position of honorary consul. Overseas travel was not very common in those days, and there was no air transport for long distances. We boarded a passenger ship in the harbour of Shanghai for a passage which would take three weeks. We were very excited about the voyage, as were our relatives and friends.

In Shanghai, my mother’s birthplace, we said goodbye to her relatives. My mother was the ninth child in the family. Many people came to our farewell dinner. After dinner we took a family picture

From the port of Medan, we continued the journey to the city by car. Along the way I saw many palm trees: beautiful, tall, majestic trees, with bunches of coconuts, and a crown of long, thin leaves. Amidst the trees there were wooden houses on stilts, where the local people lived. Their clothing was rather strange. A big, dyed cloth, wrapped around the waist, topped with a blouse or jacket. They spoke a a language which we did not understand. We learned gradually and over time we were able to communicate with the locals. The climate was very pleasant. It was summer all the time.

In Medan, my father looked around for a school for my sister and me. The Chinese school was below his standard. However, there was a Dutch and an English school. As he felt that English was more useful than Dutch, he had us enrolled into the Methodist Girls’ School, where we received a respectable Christian education. The mornings began with the ‘Lord’s Prayer: Our Father who art in heaven…”.

The children in the neighborhood had taught me how to ride a bicycle. I would go to school by bike, taking my sister and two heavy bags on the back. As she was rather chubby, it was hard work to pedal to school, especially when going uphill. I had to get off the bicycle and then push our way up. Also my parents learned to ride the bicycle. Bicycles were in those days not very common in China. During the school breaks, we went to Brastagi, a beautiful village up in the mountains, where it was nice and cool, and where we could go pony riding. Sometimes we would go boating and swimming at Toba lake.

Unfortunately, my father was recalled in 1940, after 7 years of service, and we returned to China. What a country China was then! After three years of fighting the Japanese, it was in a complete chaos. The capital had been moved to Chungking, a city surrounded by mountains in Central China. The coastal areas were occupied by the Japanese.

We had to left everything behind, said goodbye to the quiet life in Medan, and boarded an Italian passenger ship. Again, it took three weeks on the ‘slow boat to China’. We were able to go ashore in the British concession in Shanghai. It was the only port that had not fallen into Japanese hands: Whampoa harbor, one of the biggest ports in the world.

All we found in Shanghai was misery. Refugees from occupied territories who had lost everything filled the streets. Each morning truck loads of bodies were removed from the streets, to be buried in mass graves. There was a severe shortage of housing. In these circumstances, my father left in haste to his post in Chungking, 3000 km away.
The end of my wonderful life in Medan also marked the end of my carefree childhood.

(This story first appeared in the newsletter of the association “De Vriendschap”, April 2015, volume 26, no. 2)