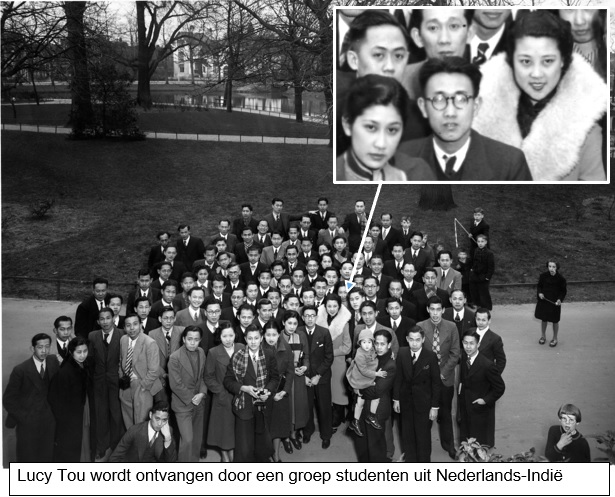 Photo : In 1939, Lucy Tou is received by a group of students from the Dutch East Indies.

In a compilation of old photos of Tan Kian Hong* I came across this picture. The radiant centre of attention was Lucy Tou, wearing a white collar, in the midst of mostly Chinese students from the Dutch East Indies. In November 1938 Lucy Tou, secretary and confidante of Mrs. Chiang Kai Shek, was sent out to France and the United Kingdom. The magazine Sin Po of December 1938 printed a distinct photo of her, as did the daily Leidse Courant of March 13, 1939.

It is interesting to read the the difference in the description of the suffering between the 150 million Chinese and the few hundreds of thousands of Jews in Germany, Austria and Italy: the suffering of the Jews appear much less compared to the death and poverty of the Chinese people.

On March 6, 1939, Lucy Tou arrives in the Netherlands, where she spent one week giving talks in several cities such as Amsterdam, Den Haag, Rotterdam, Groningen and Leiden. She spoke about the role of Chinese women in the Sino-Japanese war, and the deprivations suffered by her people.

Most press reports only spoke about Lucy Tou, but an article from Diao Ing Koen in the magazine Chung Hwa Hui Tsa Chih (a Chinese organization in the Netherlands) from March 1939 described the presence of two women: Lucy Tou and Yang Hui Ming (see attachment 1). Yang Hui Ming is not depicted in the group photograph. I believe she did not take part in the Dutch tour.

Unfortunately, I was not able to find any additional information about Lucy Tou after this period. Yang Hui Ming, on the other hand, is known as a hero (she handed over the Chinese flag to soldiers who were surrounded by the Japanese in the siege of Shanghai), and a movie was even made about her. She passed away in 1992 at the age of 77 in Taiwan.

The photograph clearly show 94 people. I have tried to find out their names. Luckily, Ko Tjoe Lan-Liem brought me in contacht with Djioe Lian, the daughter of Pauline Tan-The. She was able to help out her mother to identify many of those in the photograph. Her memory still worked quite well despite her advanced age – unfortunately she has since passed away. The names are written down in attachment 2, with corresponding numbers on the photo.

If anyone should have comments or corrections about names or identities of those on the photograph, please contact cihc.kitlv@gmail.com
A high-resolution copy of the photograph is available in attachment 3.

Additional information on Lucy Tou’s visit
Chung Hwa Hui (the committee for assistance for the Chinese people) received Ms. Tou, assistant to Soong Meiling (the wife of Chiang Kai Shek), who was on a propaganda tour to seek support for China in its fight against Japan (minutes ALV Chung Hwa Hui, March 11, 1939). After the outbreak of the Sino-Japanese war in 1937, the CHH set up ‘the committee in support for the Chinese civilian population who are in crisis’, which later became ‘the committee for assistance for the Chinese people’.
In early 1939, the committee supported Lucy Tou’s propaganda tour, which she did in the name of Soong Meiling. Ms. Tou was received by the Information Bureau for Chinese matters, an initiative by the peranakan community in Amsterdam, who were also active in the China Committee. There was also cooperation with Indonesian organizations. Lucy Tou received a lot of attention for her calls, on behalf of the Guomintang, to support China in its war against Japan.

Attachment 1:
Outlined photograph of reception Lucy Tou on March 12, 1939, and list of names:

YangHui Ming, the Chinese Jeanne d’Arc, and Lucy Tou, the representative of China’s soul Mrs. Chiang Kai Shek, are depicted here. We were first introduced to this saviour of Shanghai’s batallion of death at a press conference in Amsterdam. And what an introduction it was! Her inspiration, enthusiasm and energy overwhelmed us and left us in awe. Only such force, combined with great courage, enabled her to slip by four rows of enemy lines to fulfill the task she has taken upon herself. A truly heroic deed, worthy of a heroic people. Her words, her soul which stand behind her words, have convinced us that the bitter conviction of the Chinese people shall lead to victory.

She is a girl of 22, sometimes still child-like in her expressions and actions. But what experiences has she undergone, what horrific misery she has already witnessed with her dark eyes. Despite all that, she has maintained such hope and faith in her people.

Then came Lucy Tou, who toured the Netherlands for a week. She won over the audience at the auditorium in Leiden with her charm. With her grace and intelligence, she won over people’s hearts in the cold North: the female students, who overwhelmed her with flowers, the reporter, who cancelled an important appointment in order to hear Ms. Tou speak – and to hand over childrens’ clothing and Groningen cake to her. What would go through that beautiful head when she went on the podium, and started speaking with her melancholic voice about her birth city Tientsin, where so many of her friends had lost their lives under murderous bombardments; where the house where she was born was destroyed; where bombardments were as fierce as depicted in any movie.
What courage and restraint she showed to carry out her duties and mesmerize the audience for an hour. With great tact she managed to answer the ‘risky’ questions from the audience in The Hague, and tell them about her country and people when ‘nasty things’ happened there. What could she have thought when a woman in Rotterdam, who came to greet her, called out: “China, thousand, thousand years.”

She is a girl from a wealthy family, and grew up in an environment where proper manners were strictly observed. She has had exhausting days behind her once she arrived in Amsterdam, where yet another exhausting week awaited her. Yet, although the days may appear too draining for her fragile shoulders, those shoulders remained straight. There was always a smile on her lips as she was interviewed, or when she thanked people.

She is not a hero like Yang Hui Ming: she loves flowers and is happy if she could make plans to take a bikeride with other girls along narrow paths. However, she remains a worthy representative of Chinese women.

What impressions have both girls left behind? Two representatives of a country suffering and desperately trying to fight for freedom, sent out to shake up humanity’s conscience and point to the ruthless bombing of civilians. To reach out and ask for the help of fathers, mothers, uncles, aunts, brothers and sisters all over the world for the millions of people whose hearts are filled with hate against the killers of their parents, who are raised by members of women’s organizations, giving love to those bitter childrens’ hearts.

They propagated the sponsorship of international parents. They collect books, instruments, etc. for students whose universities, libraries, and laboratories are destroyed, and have sometimes walked for as long as two-and-a-half months with their books on their backs in order to march to remote provinces to build new educational centers. Material things can be destroyed, but not the mind. They made us realize that the Chinese woman has changed: something that we could never have known from books, magazines and brochures. Chinese women play at least an equal role as men; she shares everything, and probably suffers more in the horrors of this modern, incomprehensible war.

That this women duly and convincingly fulfill her duties in developing their country; that she deserves our admiration and love. They have given us their message, which we must accept: firm, resolute and decisive in carrying out the tasks given to us. We must be patient and not despair if victory takes a long time. Instead, we must be convinced that justice will prevail. We must be modest and humbly do what we must do, just like the hundreds of thousands unknown heroes who have gladly given their lives for their country. We must be harmonious and united in doing this work that we have taken upon us. Let us go towards a hopeful future! Diao Ing Koen