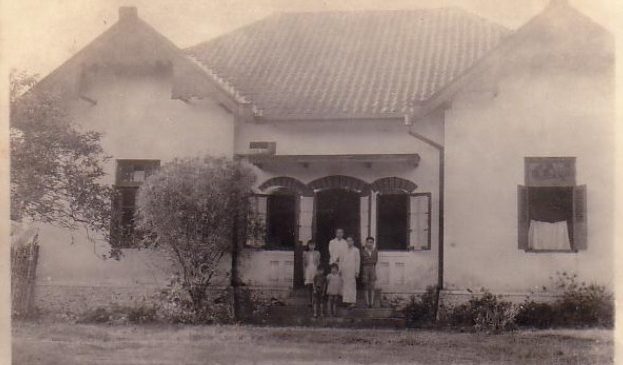 My father Kwee Kek Beng, chief editor of the daily and weekly Sin Po, had to go into hiding during the Japanese occupation in the Dutch East Indies due to his fierce anti-Japanese writings. Thanks to uncle Gwan Thay, my mother’s older brother, my father and his family were able to rent a house on a dead-end alley at the Cicendo Street in Bandung. The house on Cicendo Street 17 (see photo) was near the police headquarters, across from the deaf-mute institute. Later on, this institute became the headquarters of the notorious Kenpetai: the Japanese military police.

My father was happy to go into hiding at this address. He figured that “if a tiger wants to catch a fly, then the fly must land on his nose.”

A few months before the Japanese surrendered, something miraculous happened. I had been playing in the street when I suddenly saw the Kenpetai people searching our neighbour’s house. I ran home and warned my parents. My father immediately threw his radio (on which he was secretly able to listen to Radio Australia for the past three years) in the well and hid behind the banana trees in our backyard.

There was banging on the door, and I opened it. A Japanese officer sternly demanded: “Has this house been searched (Sudah diperiksa)?” I nodded fervently. Then the officer’s eyes fell upon the official photograph of Emperor Hirohito, which father hung above the entrance to the next room. Apparently, father had put it there for self-preservation. As if struck by lightning, the officer took a step back (the Japanese were not supposed to look upon their emperor), took a deep bow, and descended our veranda steps backwards. He shouted to the other nearby officers: “Let’s move on, this one is OK.”

We were saved by a miracle, and by the Japanese Emperor of all people!