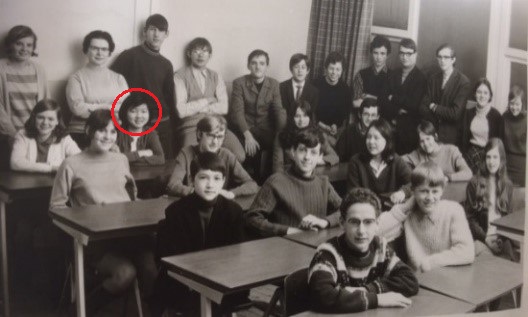 On this photograph you see me (juul Nitisusanta) as the one and only Chinese girl among the Dutch classmates at Thomas More College in Oudenbosch (in the province of Noord Brabant) in 1968.
With this history repeats itself because, 35 years ago in Bondowoso, my mom was also the only Chinese girl in a class full of “Blanda’s”.
How come ?

I am a peranakan-Chinese, that means an Indonesian of Chinese origin. I was born in 1951 in Indonesia. 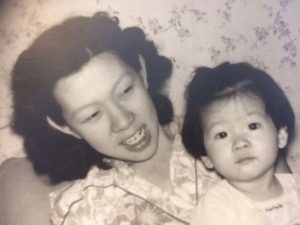 We lived in Bondowoso, a small provincial town in the east side of Java.
My parents spoke Dutch at home, because both of them were always at a Dutch school in the Dutch period. The Dutch education was the best at that time. So as a toddler, I was also at a Dutch school
When the Dutch schools had to close, I moved to an Indonesian school. My father had the opinion that I actually had to learn the Chinese language because I am originally a Chinese. So I had lessons in the Chinese language from a private teacher during the whole primary school.

In 1968 I left Indonesia for Holland, together with my brother.
Half year before we left we took several private lessons : especially the Dutch language, German and French (because I didn’t get those three languages at the Indonesian school). But also other courses with the Dutch language as the main language. We came in the third class of the HBS at Thomas More College, and stayed at the Catholic boarding school in Oudenbosch, me in St.Anna and my brother in St. Louis, both of them in the same street, near to the basilica of Oudenbosch.

We could come to this boarding school and HBS thanks to a Brother of the Catholic school (St. Louis) in Surabaya, who insured the HBS in Oudenbosch that we will be succesfull at school.
One year later my parents could stay in the Netherlands thanks to old friends from Jember, and finally we could live together under the same roof, in Amstelveen. Here we finished the last 2 years of the HBS successfully. Thereafter we built up our living in the Netherlands.
Later on my brother was moved to Florida because the weather there appears the Indonesian weather…