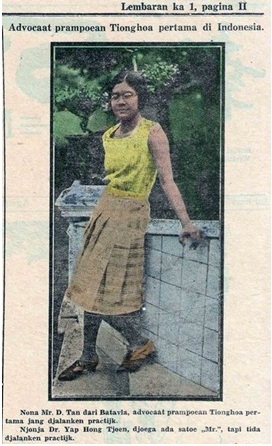 (translation of the Indonesian text above the photo):
The first female Chinese lawyer in Indonesia.

(translation of the Indonesian text below the photo):
Miss D. Tan of Batavia, the first female Chinese woman who is practicing law. Mrs. Yap Hong Tjoen also holds a law degree and a doctorate, but is not practicing.

We stumbled onto this old magazine clip on the internet, with a photo and information about our mother. We thought it would be interesting to add our information to it. Desiree Tan is the youngest of five children from the couple Tan Tjoen Lee and Han Tek Nio. She was born on September 13, 1910 in Wadas, a neighborhood of Krawang, not far from Batavia.

In 1927 she entered law school at “Rechtshogeschool” in Batavia (Jakarta) under the tutelage of Professor Kollewijn. According to the Batavian Student Bulletin of 1931, she served as chairwoman on the board of the Batavian Women Students’ Association.

She graduated in August 1931 as a lawyer with a specialization in indigenous law (Adatrecht). She was then registered as a lawyer at the Batavia Bar Association, but for a short period she was not yet able to practice law because she was still just under the legal age of 21.

She was the youngest, and probably the first, female lawyer in the Netherlands East Indies. She continued to practice law after her marriage, and even after the birth of her first child.