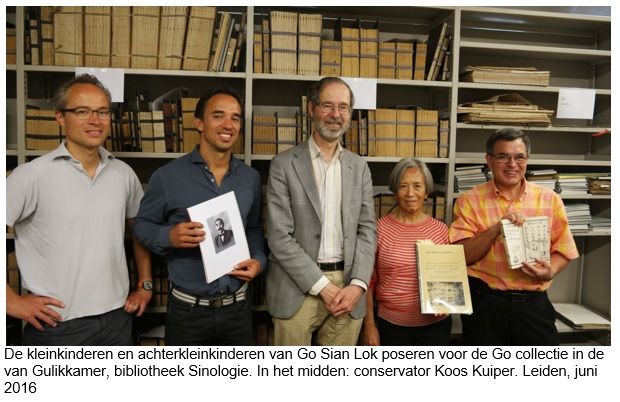 Photo : Grandchildren and great-grandchildren of Go Sian Lok posing in front of the Go collection in the Van Gulik room, Sinology library. In the middle: Koos Kuiper, curator. Leiden, June 2016.

The University of Leiden is in possession of a unique collection of 284 Chinese books: the Go collection. The books are the legacy of Go Sian Lok, who was born in Djombang in 1874, and died in Malang in 1943. A number of books in the collection carries the name of a younger cousin, Go In Han (1894-1937), whose books were cared for by Sian Lok after his death. In 1978, the Sinology department in Leiden acquired the collection for its library, where it could be accessed in the Van Gulik room. This situation however could not continue. In 2016 the Go collection was moved to the Special Collections section of the University Library of Leiden. The books can now only be viewed upon request. It was for that reason that curator Koos Kuiper invited Go Sian Lok’s descendants for a last opportunity to see their (great-)grandfather’s complete collection. It was an interesting afternoon; the fascinating diversity in the collection reflects the broad interest of the original owner.

Who was Go Sian Lok?

Go Sian Lok was a descendant of Go To, a teacher from Fujian who emigrated to Java in late 18th century. The love of the Chinese language and the Chinese classics was passed on from generation to generation. Go Sian Lok most probably received his Chinese education from his father and grandfather. It was quite common that after the second generation the Peranakans in the Dutch Indies would have lost their Chinese language proficiency, but Go Sian Lok was an exception. His command of the Chinese language in both the written and the spoken word was of such proficiency that he earned the respect of the Totok community in Malang, where he had settled after his marriage. In those days Totok and Peranakan communities were strictly separate ethnic groups. The Totoks however, regarded Go Sian Lok as their equal. As it appeared, he was the only Peranakan member of the local Go-clan, an association based on blood relationship. Additionally, Sian Lok was socially engaged in organizations representing the interests of the Peranakan Chinese, such as the funeral associations Sin Khie Hwee in Djombang and Ang Hien Hoo in Malang, and the Tiong Hwa Hwee Koan (THKK) school in Djombang.
Go moved to Malang after his marriage with the Peranakan Oei Tiem Nio, where he managed his wife’s family business, a firm distributing supplies to the local barracks and jails. As his son Go Gien Tjwan would recall, he would make time to practice calligraphy and recite Chinese texts daily despite his busy schedule.

What does the collection consists of?
All through his life Go Sian Lok collected Chinese books. It was a functional, well-maintained library. Sian Lok had a broad interest. The collection consists of 17th to early 20th century Chinese classics, reference books, almanacs, novels, school books, and works on religion, history, science, and geomancy. The value of the collection lies not so much in the rareness of the books, as in the fact that a private library of a Peranakan Chinese has been preserved in its entirety for so long. There are only a few comparable collections known in the world. One collection can be found in the library of the British Museum and another in a private collection in Semarang.
What makes the Go collection even more extraordinary is the inclusion of personal documents, such as family photos and the family tree.

How did the Go collection come to reside in Leiden?
After his death in 1943, Go Sian Lok’s library was stored in his house in Malang, where for 30 years the books remained untouched, until the family decided to find a permanent destination for the complete collection, a place where it would be accessible for research purposes.
In 1978 the collection was shipped to The Netherlands and acquired by the library of the Sinology Institute of Leiden. In this way, the children have fulfilled their duty, as stated by Go Gien Tjwan:
‘…we have transferred father’s legacy into good hands for [the benefit of] many generations after us, and furthermore, we have honoured Papa by doing so.’ *