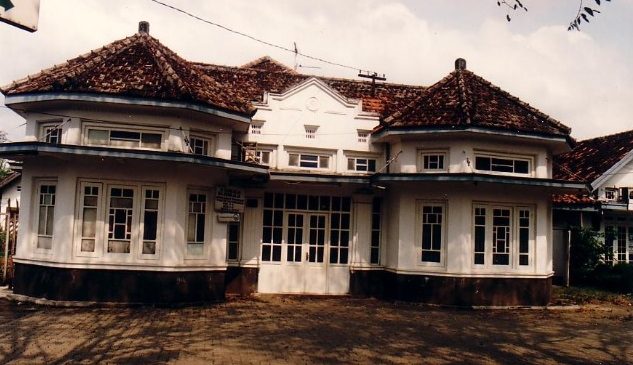 My childhood home at Paalmerah Noord 106 in Jakarta. Photo taken in 1996.

The house on Paalmerah Noord street 106 in Jakarta was originally built by my maternal grandfather Tee Boen Kee on five hectares of land. The house and garden stood on an area of were 1,500 square meters. In the back of the house was a large coconut plantation with small houses leased by farmers.

The Tee family had an exuberant lifestyle and were known as ‘the princes of Paalmerah’. My grandfather was exemplary of this title: he was an artistic and elegant man, who always wore black, buckled patent shoes at parties. His suits came from renowned tailors such as Savelkoul or Oger Frêres.

The Paalmerah Tees, all family of my mother, had batik factories. Grandpa Boen Kee owned the batik factory ‘Kee-Hiang’, taken from his own name and that of his younger brother Tee Boen Hiang. They were director/owner and manager, respectively.

Each year grandpa would create his own batik designs. In 1928, the year that my parents wed, the theme of the design was ‘kopi susu’ (coffee with milk). In my parent’s wedding photo, a big bouquet of flowers is seen with the tekst ‘Congratulations Kopi Soesoe, Hoo Hin Goan Firm’. I was later named after this friend of my grandfather’s.

My grandfather also used his kopi susu theme in composing his keroncong songs for BMA (Batavia’s Musich Association), where he was a board member. Until today, this song is still played by keroncong orchestras. It was also included in a record of old Jakarta songs: http://kineruku.com/songs-from-old-djakarta/

The financial crisis of 1929 also hit Grandpa Boen Kee, as his batik factory went bankrupt. My father Kwee Kek Beng, who at that time was chief editor of the Chinese-Malay daily and magazine Sin Po, took over the house. Friends of mine who recently visited Jakarta told me that the house no longer exists.

Meanwhile, the descendants of the Tee family has spread all over the world. There is my aunt Elly in California, and the grandson of Tee Soen Kim resides in Sweden.

The author with his sister Hin Hoa at Paalmerah 103 in Jakarta in 1936.