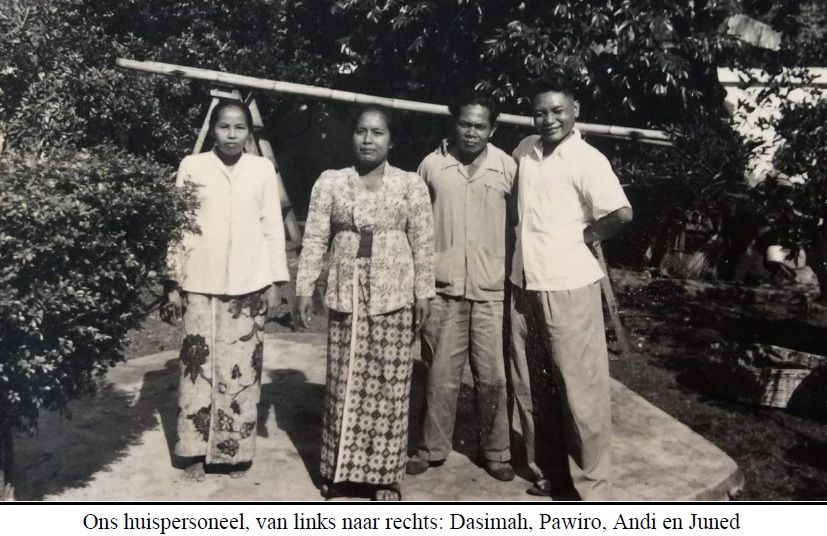 Photo : Our household staff, from left to right: Dasimah, Pawiro, Andi and Djuned

It is August 1956. Shortly after that I would get on an airplane towards the Netherlands for my studies. My parents, who at the time were in Europe, left the care for me, my older brother and two younger sisters to the household staff. Incidentally an aunt would visit and make sure everything was going well.

Before my departure, I took some photographs of my home – and everything that I held dear. Of course I also take a picture of those four people who took such good care of us, the house and the garden. They had been working for us for years, and are part of our lives. On the left is Dasimah, who washes all our clothes every day, hangs them to dry and irons them. I recall her ironing with a coal iron. While I write this, I wonder if this memory is correct, or if I was actually thinking back to earlier years of my childhood, in a different house. In the afternoon everything will lie freshly washed and ironed in the laundry basket. I realize that having laundry washed and ready on the same day is a luxury, as I now have to do all that by myself in the Netherlands. When that is done, Dasimah would go home. Standing next to her is Pawiro, the cook, who is married to Djuned, the man on the far right of the photo. Both lived in our house.

I cannot remember much of Pawiro’s cooking. Most likely she was a good cook, but not an exceptional one. My mother was the one who would cook special dishes. The way Dasimah and Pawiro were dressed is seldom seen nowadays. Most people would prefer western-style clothing.

Andi, standing to the right of Pawiro, is our driver. He looks a bit disheveled in this photo, which was unusual for him. Andi gave me my first driving lessons. When I returned from school and the streets were quiet in the afternoon heat, he would teach me how to work the clutch of our Austin, accelerate, navigate corners, park: everything that had to do with driving. He was a kind man whose path of life would sometimes be talked about in a negative manner, as he had three wives: one after the other. At the end, he remained faithful to Enék, who was well over a head taller than him.

On the far right is Djuned. He was responsible for ‘male’ tasks such as the garden, the driveway, the dogs and watering the plants. My clearest memories of him were that he was always the one who served us our evening meals. My parents, particularly my father, thought it important to have a well-set table, with the dishes served with the proper utensils. Djuned, always well dressed, would stand in the same corner of the room next to the grand piano, and help us with the food whenever necessary. He would refill glasses with water, and made sure all our needs were met.

When I look at this photograph and these people, I am filled with warm thoughts. They are part of my memories of those wonderful years in Bandung, where I returned to after leaving for several years of boarding school.