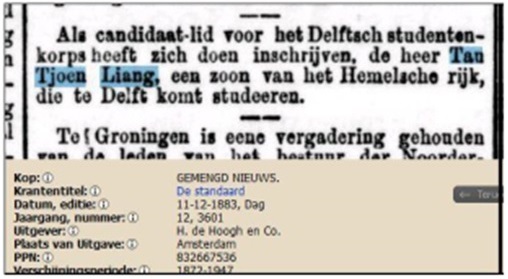 Direct ancestors were our starting point in drafting the family tree. My maternal grandfather was Tan Tjoen Lee; T.L. Tan Jr. on official documents. In the Dutch-Indies address book we saw the name T.L. Tan appear twice: T.L. Tan Jr. and Ir.* T.L. Tan Sr. The question soon arose: who was this Ir. T.L. Tan Sr.? He appeared to be Tan Tjoen Liang, my grandfather’s eldest brother. What did we know about this brother? Inquiries with our cousins and a search through old TH Delft yearbooks and historical newspapers produced the following information:

Tan Tjoen Liang was born on 3 March 1863 in Buitenzorg.
His father was Tan Goan Piauw, “Kapitein der Chinezen” in Buitenzorg, and his mother was Thung Leng Nio.
In 1877 he passed the admission exams for the HBS KW III in Batavia.
In 1883 he passed his final exams.
He immediately left for the Netherlands, to Delft, where his appearance was considered unusual.

According to the Delft Students Almanac, he lived with the Van Rijn family at 135 Oude Delft. He began his studies in mechanical engineering in 1884.
His name shows up in the Delft Students Almanacs from 1885 through 1889. The note behind his name indicates cwi (civiele werktuigkunde = civil engineering) in 1885 and ci (civiele ingenieur = civil engineer) in 1886. From 1887 to 1889 it is wi (werktuigkundig ingenieur = mechanical engineer). In 1888 records show that he passed the B exam for mechanics.
Between 1885 and 1889 his name also appears in Students Societies and Companies. He is listed as member of F.C.Q.D. (Forte Citius Quam Dolo) and later becomes secretary, then chairman. He takes part in a play, entitled “Muslim”, where he plays Mohammed with two other fellow students playing Abu Bakr and Omar.
From 1890 his name stops appearing in the Students Almanac. No C exam had taken place, so he couldn’t be an engineer at that time.
The address registered on his Civil Status card is 135 Oude Delft and VT 1890 is recorded as the year of departure from the municipality. Apparently he returned to Buitenzorg in haste, because his father Tan Goan Piauw passed away at the end of 1889. Tan Tjoen Liang was appointed guardian of his youngest, minor brother Tan Tjoen Lee.

In order to be sure, we searched through a number of volumes of Students Almanacs and we found his name again in 1893/94; he was then living at 26 Koningstraat in The Hague. Tan Tjoen Liang was back in the Netherlands. In the same year, his youngest brother Tan Tjoen Lee also came to the Netherlands to study at the HBS for commerce in Haarlem, so they may well have been traveling together. This is later confirmed by these newspaper notices:

In 1895 Tan Tjoen Liang was listed among the graduates of the C exam for Mechanical Engineering. He was the first Dutch-Indies born Chinese to acquire an engineer’s degree in Delft.

Tan Tjoen Liang passed away on 28 March 1923. We found an announcement in the “Algemeen Handelsblad”, placed by his nephew Tek Tsjoan who studied in Delft at that time.

The obituary dwells on the fact that he was the first Dutch-Indies born Chinese who studied in Delft and acquired an engineering degree, as well as how he, a modest man, mainly occupied himself with the management of the Tegal Waroe lands, an estate he managed and co-owned.