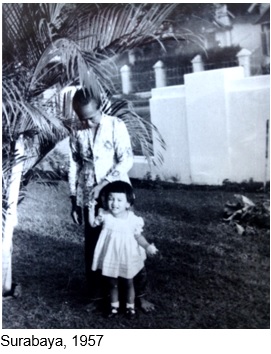 I am a Peranakan, the cultures should integrate inside me.
Six-years old, I come home from school and ask: “Mother, what am I?”
“You are Chinese, born in Indonesia, you live in the Netherlands and have a Dutch nationality.”I was 3 years old when I came to the Netherlands with my family from the former colony in the tropics, Indonesia. It was 1959. Integration came natural to me. The word integration did not even exist in my childhood. The term emerged many years later and did not apply to me. It was for people from abroad, the so-called “allochtonen” (immigrants) or, at the time: the Surinamese.
I was the only non-white in pre-school.
I was the only non-white in primary school, together with my sister.
I was the only non-white in secondary school, together with my sister.
I grew up in the white Buitenveldert area in Amsterdam, had Dutch friends, had meals and sleep-overs at their homes, went camping with them.
I had Dutch boyfriends, ate with them and slept with them.
I was the only non-white on ski trips, on tennis courts, at the skating rinks. I felt white and was white (inside), for that matter.Of course, when I was young my presence would provoke a reaction from people from outside the metropolitan area. There was an awkward silence when I walked into the restroom of a camp site, I saw curtains moved when I walked by, and people staring at me. But that was natural, because I just looked different. Admittedly I was not born in the Netherlands, but I was raised there, and I feel Dutch, one hundred percent. The family who would regularly come from Indonesia, well, they were really different. They smelled different and shook hands limply, the girl cousins giggled, spoke softly, and were meek. I thought they were strange, but they were part of my childhood, of my past, of me, because I was born there, as stated in my passport.For me there were two categories of Chinese people. The singke: they are truly from China. They speak Chinese and have a restaurant or toko. We were different. We were babas: we were white Chinese, because we speak Dutch flawlessly, send our children to Dutch schools, celebrate St. Nicholas and eat fried potatoes with applesauce, and chicken or turkey at Christmas. Of course, at our home things were a little different than at my friends’: there were always lots of relatives staying with us, for three to six months at a time. When they visit everyone does his/her own thing: my father dives behind his newspaper, my mother chats with the aunties, I watch television with my feet up, my uncle listens to the announcements of the outcomes of the football pool on the radio, and tinkers with the car. Real Dutch people sit upright on their chairs, wear shoes, form a circle, and have a conversation at certain times during the day. But we do things differently, and that was only natural.

For the first time, at 27 years old, I go to a country where 98% of the population is Chinese: Hong Kong. I step out of the airplane and I see myself everywhere, my straight black hair, my arms and legs, my skin. I see uncles and aunts everywhere, I recognize the way they move and carry themselves. People are together, yet also by themselves. Hong Kong is me: a Western package with an all Chinese filling.
In the bus, I feel a sense of belonging, home, we are one big family. It is the happiest time of my life. For three months I do not think of yesterday, or of tomorrow. I AM there. Back in my own home, it seemed like a dream and everything is fine again: it is also OK in the Netherlands and I can understand what people are saying.
But there is a little crack in my Dutch identity. No, I am not Dutch for the full 100%, but 98… 95… 90? In the Netherlands there is a feeling that something is missing ever since. What is missing? Recognition, appreciation, being seen and heard?

Twenty years later, it is September 2004: I hear that a distant relative has bought an apartment in China. WOW. I want that too. I cannot let go of that thought. I go there. It is a shock. The beds are hard, I crave bread and coffee, the food doesn’t agree with me, I can’t speak with anyone, but inside me there is that same feeling: recognition, belonging, I feel homesick. Homesick for what? For whom? For the first time in my life I have nationalistic feelings: I am proud of my people who have suffered so much, who can work hard, who emit a lot of energy. Where people live with each other. I buy the apartment. Why? I do not know. What do I want there? I do not know. What do I expect there? I do not know. Now, I try to learn Chinese and when I walk on Nieuwmarkt, I can read a few Chinese characters.

This is the story of my multicultural background and the recovery of my original culture. I am Peranakan, the cultures should integrate inside me. I live with my partner in Amsterdam and, since 2005, I spend my vacations in my apartment in Shenzhen.
.