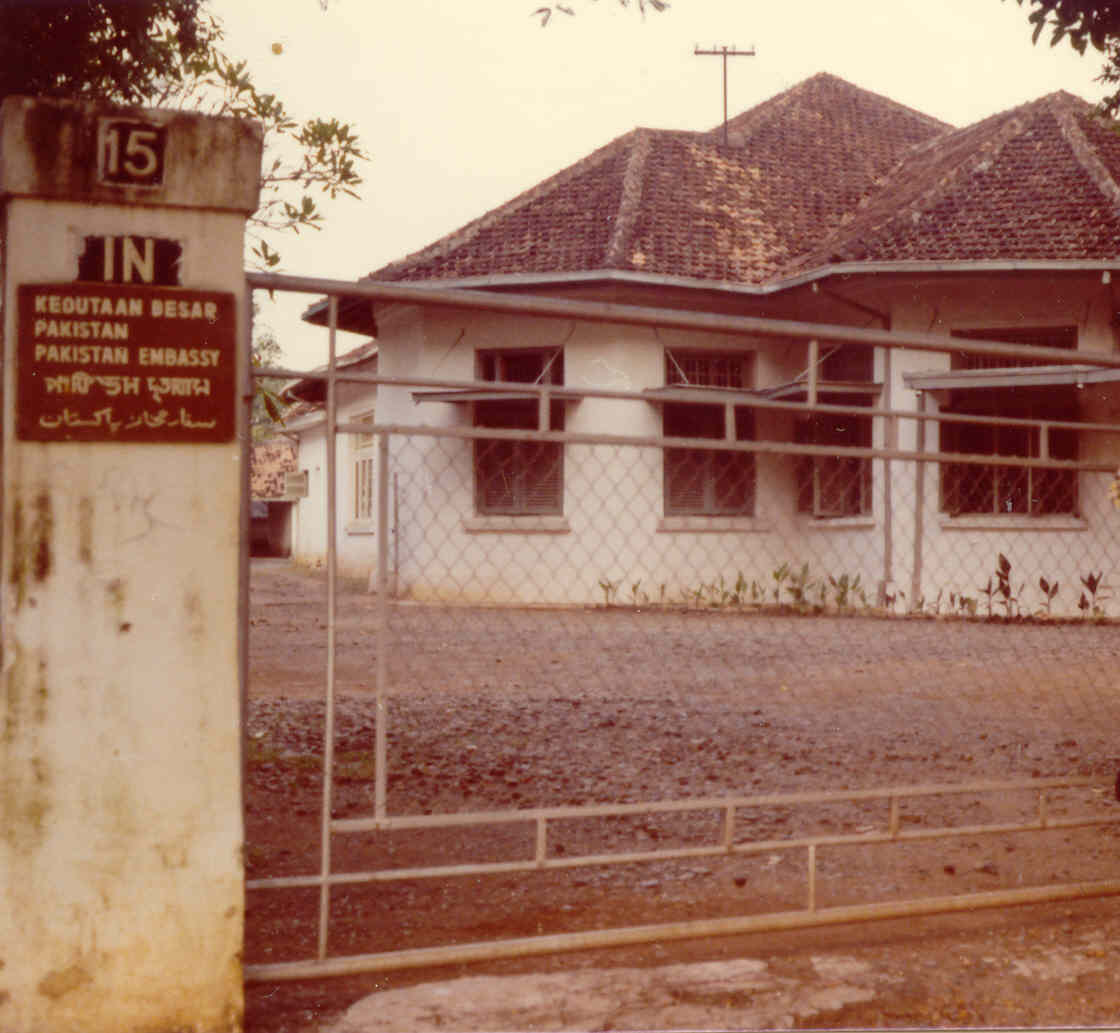 From the multi-lingual description under the house number ‘15’ in the photo above, it is clear that this used to be home to the Pakistani Embassy. My grandfather H.H. Kan, a former parliamentarian, lived in this house after World War II until his death in 1951. It was also the last house that he could call his home.

When he died, his body was laid out in an open casket in the house’s front porch, which is an open space seen on the photo as the protruding part of the house on the right.
Through that porch, one can enter the house through the front door. The first room behind the front door is where the ancestral altar stands. On the day of my grandfather’s death, incense was lit during the lying out and casket ceremonies. The door connecting the front porch and the room where the ancestral altar stands was left open in order to connect the casket to the altar. The casket was placed as close as possible to the altar, and thus right near the door.

Apparently the word had spread that the front door was open, because without warning a group of Pakistanis forcefully entered the house and occupied it. In the process, the Pakistanis had to walk past the casket with their luggage: suitcases and boxes. This disturbed my father, who was busy with preparations for the burial ceremony by the casket. I specifically remember an incident where my father, just as he was putting in a pearl in my father’s mouth (part of the death ritual), was pushed aside by a Pakistani intruder such that he fell against the casket. I could feel my father’s pent up anger as the Pakistani did not even apologise.
My mother later said that the police had refused to interfere as it involved a “friendly Moslem state.” From that day on, the Pakistani embassy personnel never left the house. They even tried to occupy the pavilion in which my aunt Lucy, my grandfather’s eldest daughter, lived. This did not work, thanks to the fact that she was married to a German national. Later on, they had put a sign in front of the pavilion saying “territory of the German Republic.” The few pieces of furniture and belongings of my grandfather’s, which had been retrieved from his seized house in ‘Parapatan’, were dumped by the Pakistanis in the front garden and on the street. Thus, many objects were lost such as photographs, important documents, family data and other things.

Before World War II, my grandfather owned three villas: the house on Parapatan, a country house for his wife in Cicurug, and Villa Mei Ling in Bandung. The latter was pegged by my grandfather and his brother Han Khing Bie to become a museum of the Kan-Han family.

The villa was filled with art and antiques. During World War II, my family offered the villa for the use of the retired Governor General Tjarda van Starkenborg. Then the house was taken over by the Japanese occupiers, followed by the British liberators. When the last Brits left, they took everything in the house (the art and antiques) in 35 lorries as war loot. The Dutch East Indies government said it could not do anything because the Supreme Command was in the hand of the British – and they were the liberators. After the British left, General Spoor arrived and handed the building over to the Indonesian state. Thus, the loss of the house was definitive.

The country house in Tjitjoeroeg was robbed and destroyed during the Bersiap period. The Gurkhas rescued those living in the house just in time. The house on Parapatan, meanwhile, was used by the navy corps of the Japanese, followed by the British, the Dutch East Indies, and ultimately the Indonesians. This villa, with everything in it, was also lost to him. Luckily, his construction company ‘Parapatan’ still had a house on Van Heutz Boulevard, which was later renamed Jalan Teuku Umar 15 (house on the photograph). My grandfather was able to live in that house. Next door, on number 11, was occupied by his brother Han Khing Bie, while his sister Han Tek Nio lived on number 13. By the time of his death in 1951 he – and his family – also lost his last house to the Pakistanis.