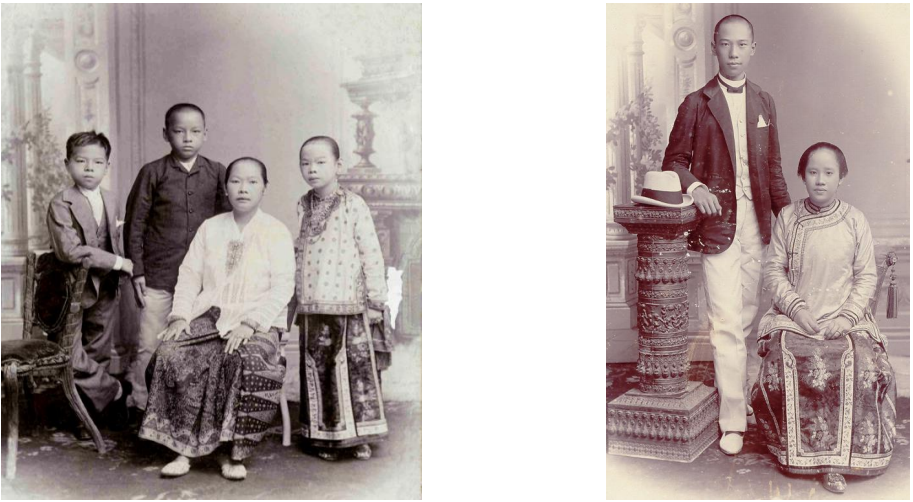 The woman and three children posing in the first photograph, dated from around 1894, are the widow of Han Oen Lee and her three children: Han Khing Tjiang, Han Khing Bie en Han Tek Nio.

Han Oen Lee is a native of Surabaya and married Kan Oe Nio of Batavia on March 8, 1876. He owned land in Bekasi, nearby Batavia, and was appointed Lieutenant of the Chinese community there. He grew specific varieties of rice, which were imported from China’s Fujian province. This rice had bigger grains and richer harvest compared to the rice commonly grown in the area. Mr. Han was able to profit from his crops and expand his land ownership. This, in turn, was used as starting capital by the brothers Han Khing Tjiang and Han King Bie.

Han Oen Lee passed away from injuries following a big fire in the Chinese quarters of Batavia in 1894. Han Khing Tjiang’s grandmother, Jo Heng Nio, then arranged to have him adopted by her childless son Kan Tjeng Soen. Khing Tjiang then changed his name into Kan Hok Hoei, and after being ‘equalised’ to the legal status of the Europeans, he was known under the name H.H. Kan.

The second photograph shows Han Khing Bie and his wife Tan Tjit Nio, who later passed away in the big influenza epidemic of 1918.

This third photograph, dated from around 1885 in Surabaya, shows Han Oen Lee’s parents, brothers and sisters with their respective families. The entwined relationship among the Han, Kan and Tan families can be viewed on the following site:
www.genealogieonline.nl/stamboom-kan-han-en-tan

After World War II, Han Khing Bie and H.H. Kan lost their homes, and moved to either side of the house where their sister Han Tek Nio lived, on the Van Heutz Boulevard 11 and 15 in Batavia. This street is now called Teuku Umar in Jakarta.