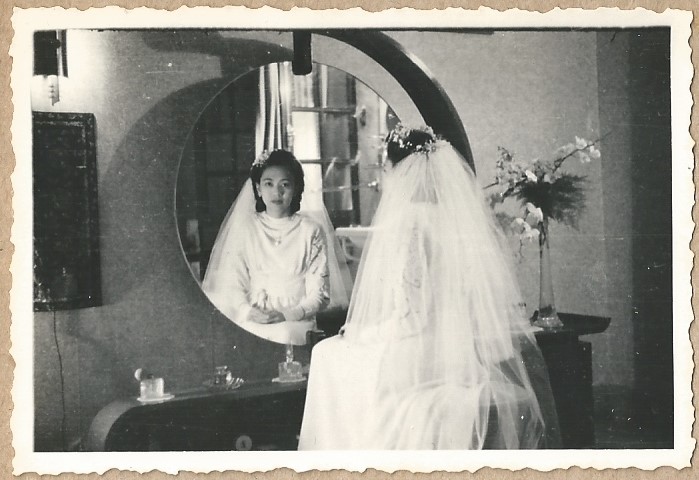 The photograph is almost classical: young bride in front of a mirror. However, this story is not about her, but about the vanity table in front of her. A daring design: a mirror hangs freely on a sleek wooden standard. It seems as if it is floating.

In 2016 I visited an exhibition on interiors in the style of the Amsterdam School in the Stedelijk Museum in Amsterdam. One interior was dedicated to the Amsterdam School in the Netherlands-Indies. It was the salon of the Han Tiauw Tjong family’s villa in Semarang. The villa, as well as the furniture, was designed in 1932 by Liem Bwan Tjie, who was already a very popular architect before the war. An enlarged photograph of the family covered the whole back wall. The room was furnished with original furniture from the collection of Liem’s daughter, Mrs. I.S. Rombout-Liem. In the showcase there were design drawings in art deco style by the architect. Amongst these drawings, I discovered a drawing (figure 2) of a vanity table which reminded me of the wedding photograph where my mother is sitting at a vanity table with a round mirror. She married my father Tan Soen Hong in 1947. At home I immediately looked for the photograph in question (figure 1). There is no mistake: my mother sat at a vanity table designed by Liem Bwan Tjie.

The photograph was taken in Loa Sek Hie’s house at Sumatraweg 13 in Jakarta. This house was designed and furnished by Liem Bwan Tjie. He and Mr. Loa were good friends.

I do not know why my parents, who were both from Surabaya, married in Jakarta. They never talked about that period right after the war. But some fifteen years ago Mrs. Loa Soei Hiang (aunt Ate), daughter of Loa Sek Hie, told me that my mother together with her parents and her sister with her family were evacuated to Jakarta because of the dangerous situation in Surabaya. ‘The photograph of your mother sitting at the dressing table was taken in my bedroom.’

Long ago Loa Sek Hie’s house at Sumatraweg has been taken over by others and through renovations it has become unrecognizable. The furniture has also disappeared, but with the photograph and the design drawing of the dressing table, one piece of Liem Bwan Tjie’s heritage comes to life again.

Liem Bwan Tjie (Semarang 1891- Rijswijk 1966) studied architecture in Delft and Paris between 1920 and 1926. He worked as a drafter for the famous Amsterdam architects Michel de Klerk and Piet Kramer. In 1929 he returned to Semarang where he mainly accepted private assignments. After the war Liem moved to Jakarta. In the capital city he obtained many government assignments, amongst others the Leprosy hospital in Tangerang, the Ikada Sports stadium in Jakarta, the ministry of Agriculture, the North Sulawesi University campus in Manado, and a hospital in Makassar. In 1965 Liem and his family left for the Netherlands where he passed away the following year.