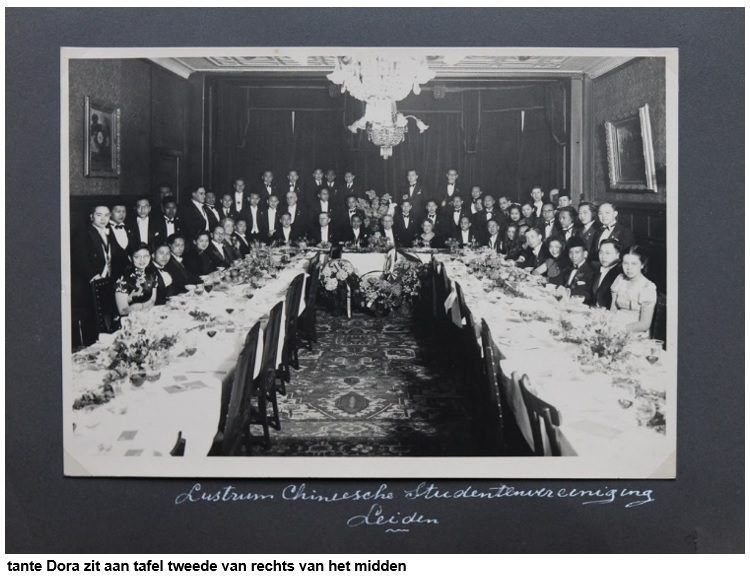 In a suitcase full of photo albums given to him by a cousin from England, Paul Meyboom found a collection of photographs of the Chung Hwa Hui Students Association in the Netherlands. The pictures depict the celebrations of Chung Hwa Hui’s 7th lustrum in 1946 in Leiden. The Board* and other students were stylishly dressed for an elegant dinner.

Paul Meyboom, a retired archaeologist from Leiden University, appeared to be related to Mr. P.H. Fromberg through “tante Dora”, the wife of his great-uncle Ary Meyboom, a banker. Said “tante Dora” was Mr. Fromberg’s daughter. She was always present at special events organised by the Chung Hwa Hui. In view of Mr. Fromberg’s significance to the Chinese students, she might have been made honorary member of the Chung Hwa Hui. Tante Dora (1884-1972) had many entertaining stories to tell about her father.

Paul Meyboom tracked me down, because I had mentioned the name Fromberg quite a few times in my doctoral thesis “The Legal Status of the Chinese in the Netherlands-Indies 1848-1942”. Fromberg (1857-1924) came to the Netherlands-Indies as a lawyer. He made a career in the judiciary in his early Dutch-Indies period (1883-1908). In 1906 he became a member of the Supreme Court of the Netherlands-Indies. He was known for his critical essays on the poor legal position of the Chinese at the time. “The Chinese Movement in Java”, published in 1911, was particularly acclaimed. He remained an advocate for the Chinese cause in the Netherlands by continuing to write on the issue. For the Chung Hwa Hui he was a paternal friend. In appreciation, after his death the Chung Hwa Hui published a compilation of his works. The edition (1925) was known as “Verspreide Geschriften” (Circulated Texts) by Fromberg. According to Paul Meyboom, Mr. and Mrs. Fromberg’s portraits with Chinese inscriptions are still in the possession of the family. These oil paintings were presented to them by the Chung Hwa Hui on its 7th anniversary, on 14 April 1918. Fromberg’s portrait is also shown in “Verspreide Geschriften”.

With thanks to Paul Meyboom,

CIHC welcomes additional information in reference to the photographs.