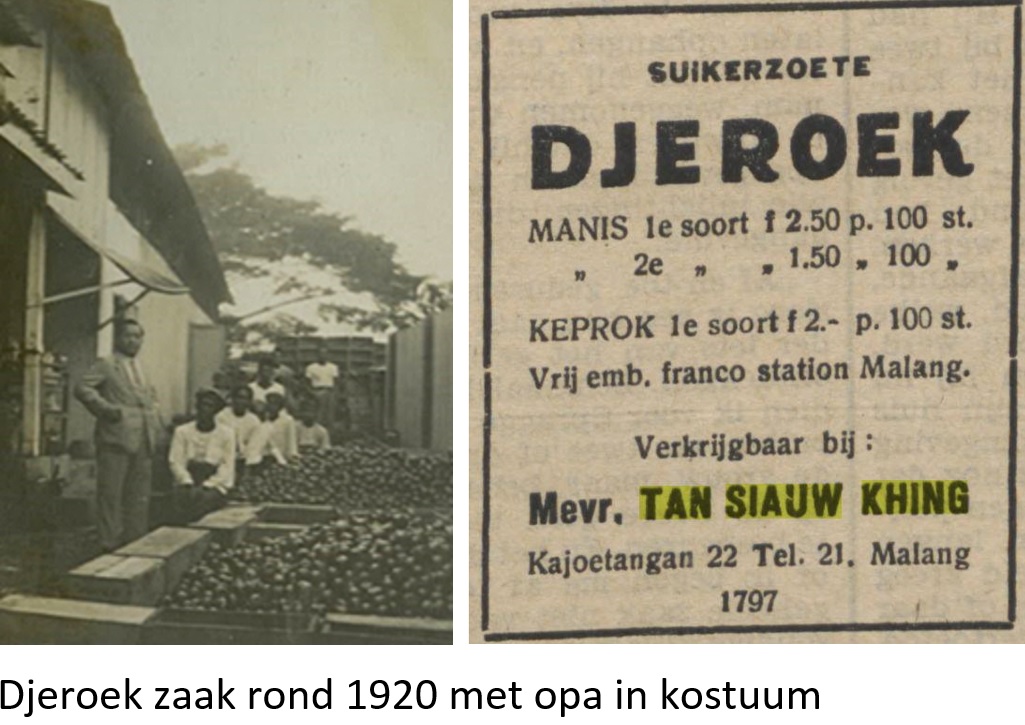 Photo : Grandfather in suit and the orange shop around 1920

In 1917, my grandfather Tan Siauw Khing (born in 1897) and grandmother Kwee Lian Nio (born in 1901) set up a business in Malang, selling oranges from Batu. My grandfather was a second generation Chinese Indonesian. His grandfather, Tan Tjong Gan, was born in Amoy (presently Xiamen, Fujian province, China) and had settled in Pabean, Surabaya, around 1850. His wife was from Tuban, East Java, about 100 km west of Surabaya. They succeeded in growing sweeter oranges in Batu which sold well in Malang. My grandmother played a key role in the business. She would shout instructions from her bedroom window, only a few hours after giving birth.

Business went very well, and by 1920 Siauw Khing had accumulated enough capital to open a shop for jewelry and watches. He was also engaged in collateral-backed money lending: clients pawned their valuables against interest and would reacquire them after repayment. In those days it was not an uncommon practice to generate income from accumulated capital. Both his brother Tan Ting Tjhiang (TTT Printshop) and cousin (KKK Jewelry) were engaged in this kind of trade in Semarang.

Both businesses performed well, and around 1925 he was a successful and wealthy man. The family refers to the time before 1925 as the “poor” period, and the time after 1925 as the “wealthy” period.

Business went very well, and a larger building was needed. The story continues in part 2.

Tan Tiong Boen, January 2017
(With thanks to I.Y. Tan and R. Almer for their contribution)