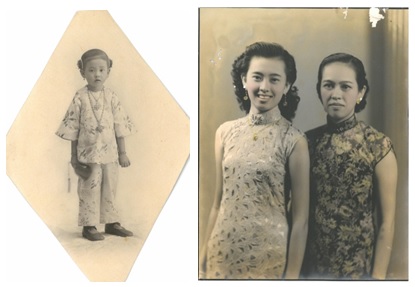 In 1923 my mother Tan Bor Lan was born in Palembang (Indonesia). Her parents gave her an Anglo-Chinese education. Her family originally came from the coastal province of Fujian; at home they spoke the Hokkien dialect. As a young girl, she was dressed in a Chinese jacket and pants. The photo on the left shows her as a bridesmaid at the age of 7.

From the blend of exotic cultures in Dutch East Indies, the Chinese component was the most appealing to Bor Lan. This was clear from her way of dressing. From 1940’s on her favourite dress was the cheongsam. In the heydays of this costume, ladies from Shanghai wore cheongsams in combination with silk stockings and high-heeled pumps, which was considered to be the summum of female elegance! From her earnings as a young teacher Bor Lan bought jewellery with jade and diamond. The photo right shows my mother and grandmother from those days.
Bor Lan has lived in Singapore and Indonesia, where she has purchased custom-made cheongsams from local tailors. In 1966 our family left Bandung (Indonesia) and settled in The Netherlands. She remained loyal to her dress and continued to wear cheongsams at festive occasions. When my cousins and me were young, my mother and sixth aunt sewed cheongsams for us. And the tradition has now been passed on: my daughter celebrated her 21st anniversary in a cheongsam, seated proudly amidst her Dutch friends in Leiden!