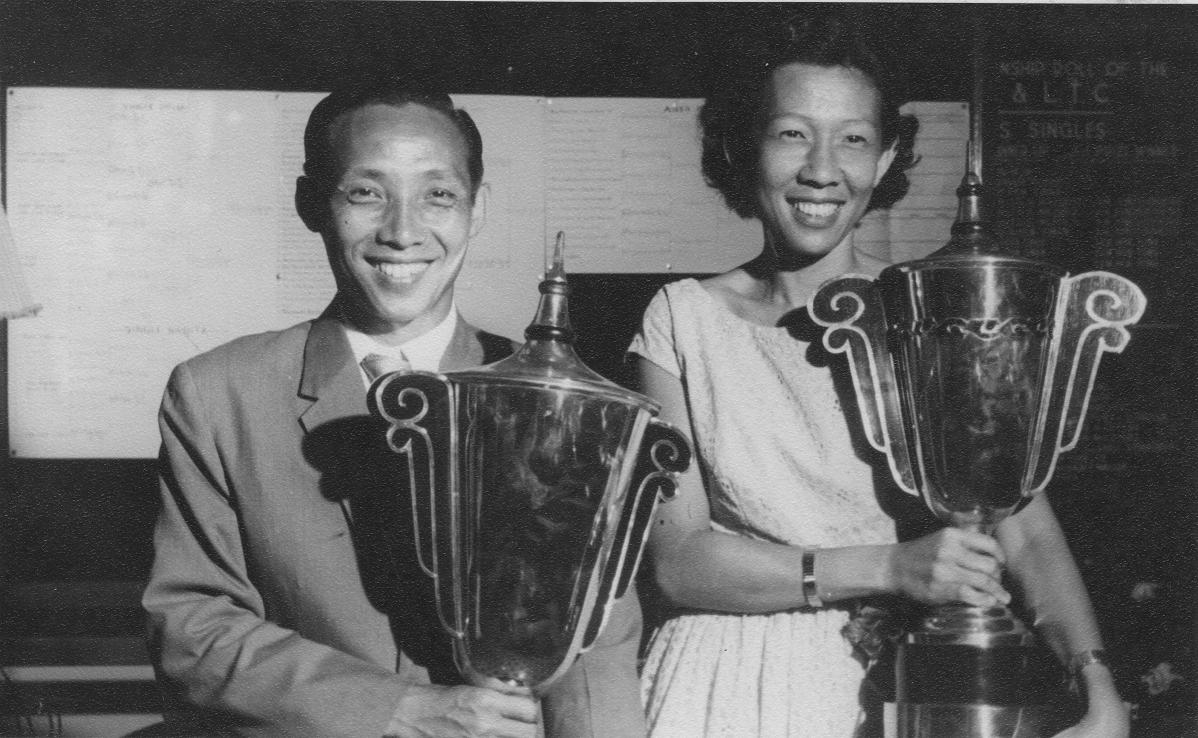 Through Facebook, I received the above photo of a tennis championship in Indonesia. The photo was probably taken in Semarang in 1957.
The lady on the right on the photo is my mother Mrs. Kwee Tjoen An (Hilly Tjioe). From 1955 onwards she was five times champion in a row at the Indonesian Open Tennis Championships in Semarang. As a child (born in 1951), I attended these several times.

The photo motivated me to do research on my mother’s tennis career. In those days Dutch newspapers were still published in Indonesia. As these newspapers are all digitally scanned by the National Library of the Netherlands (Koninklijke Bibliotheek), and presented through their website, one can easily browse newspapers by using a search option: http://kranten.kb.nl/search.
By selecting ‘Nederlands-Indie/Indonesie’ in the area of circulation (verspreidingsgebied) one can limit the search to newspapers in Indonesia. In the search field I use the name “Kwee Tjoen An” because as a married woman my mother was registered under my father’s name. The search results in 35 hits: by selecting an article from the Algemeen Indisch Dagblad: de Preangerbode dated 25 april 1957 – the total newspaper consisting of four pages on pdf – one can read the following on page 3:

The newspaper of that day not only reported the weather in Bandung, but also Soekarno’s visit to his sick mother and the drowning of Boy Hendrik Kofman (age 19 years) in the Dago river. The newspapers of the National Library of the Netherlands (Koninklijke Bibliotheek) are a valuable source of information in the research of one’s family history.

Juul de Moel-Nitisusanta, July 2012
(born as Lauw Siu Li, daughter of Louis Lauw, who officially used his adopted/kweepang name Kwee Tjoen An. Due to government regulations in 1967 the Chinese family name Lauw was changed to the Indonesian family name Nitisusanta)