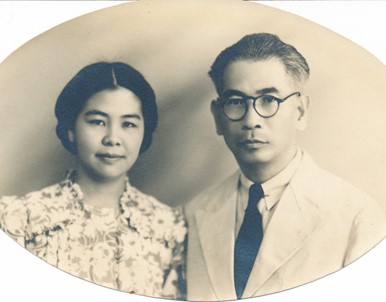 ‘Fragments from a Distant Past’, the Photo with Story #59, was deftly written, showing zest and originality. Who was Han Swan Tiem, the writer? Did she go on to study Dutch? What was her life like afterwards? On the contributors’ lineup for the HBS Surabaya Anniversary Album, she was listed as T. Liem Bwan Tjie-Han Swan Tiem. That means she was married to renowned architect Liem Bwan Tjie. Plenty has been published about him, but who is the woman behind the man? Their daughter, I Shan Rombout-Liem, took the time together with her sister Ch’ing Sze Liem to write a Photo with Story about their mother, who developed her talents within her role as a wife and a mother.

Han Swan Tiem (Malang 1917 – Bennebroek 2006) was the daughter of  Sie Tjwan Siang and Tjoa Swat Nio. Her given name was Sie Tiem Nio. As a baby, she was adopted by her oldest sister and brother-in-law Han Oen Tiong. She grew up in a loving family. Her adopted name was Han Swan Tiem, but after her marriage she used her maiden name Sie Tiem Nio of T. Liem Bwan Tjie-Sie. As an author, she used a number of pseudonyms.

Han Swan Tiem’s enrollment to the First European Elementary School, and later the HBS (Hogere Burgerschool, secondary school) in Surabaya (1932 – 1937) had a significant impact on her life. After the HBS, she studied at the Faculty of Arts and Philosophy in Jakarta, from the time that the faculty was set up until the Japanese arrived. Already since her HBS time, she wrote children stories, complete with her own illustrations. After the HBS, she hosted the radio program ‘Chinese Children’s Hour’. Her illustrated stories were published in the children’s column of the Sin Po daily, with Kwee Kek Beng as the chief editor.

Her future husband, the architect Liem Bwan Tjie (1891-1966),  was a good friend of Kwee Kek Beng. In 1942, Bwan Tjie and Swan Tiem got married. Shortly afterwards, they had to go into hiding at her mother’s house in Malang. The Japanese were looking for her husband, since he had worked for the Dutch. Prior to the arrival of the Japanese, he was active in an anti-Japanese movement, and was sector head of the demilitarized Air Protection Service in Semarang. After the Japanese left in 1945, he re-opened his architecture bureau – which had been in Semarang – in Jakarta.* Swan Tiem chose to be the administrative assistant of her husband’s firm, instead of going to the Netherlands to further her studies. In 1947, their daughter Ch’ing Sze was born, followed in 1951 by a second girl, I Shan.

In 1965, the family emigrated to the Netherlands due to the uncertain political sphere in Indonesia, and to ensure good education for their daughters. In the Netherlands, she went to work at the Royal Institute for Engineers (Koninklijk Instituut van Ingenieurs  KIVI), and the Dutch Library and Lecture Center (Nederlands Bibliotheek en Lectuurcentrum NBLC). At the same time, she studied acupuncture and homeopathy. After she retired, she took art history classes at the University of Amsterdam.

She published books in Indonesia as well as in the Netherlands, mostly about Chinese culture. Her interest in Chinese culture and religion was already present since her studies at the university, where she did research for her thesis. Based on her knowledge on the subject matter, she wrote ‘Hari Raja Tionghoa’ (Chinese King Day’)(1953-Wolters), ‘Chinese woorden van Wijsheid’ (Chinese Words of Wisdom’) (1977-Elmar), ‘Kostbaarheden uit Verzonken Verten’ (Treasures from a Buried Past) (1994-Alana), and ‘Kwan Im’ (2005-Ankh Hermes).

Her interest in homeopathy comes forth from her studies. She wrote ‘The Family’s Homeopathic Handbook’ after these studies. She was already 88-years-old when her last book, ‘Kwan Im’, came out. She also gave lectures. In 1999, for example, she took part in a symposium of De Vriendschap (The Friendship) association. These activities gave her a lot of satisfaction, new insights, friends, and acquaintances.

*In addition to working as an architect for individual clients, Liem Bwan Tjie also did work for the Department of Transport, Waterworks and Recontstruction, in the State Buildings division.

Here you can read an interview in Dutch with T. Liem Bwan Tjie in the Haarlems Dagblad of May 29, 1997.

Photos were provided by Mrs. I Shan Rombout-Liem.