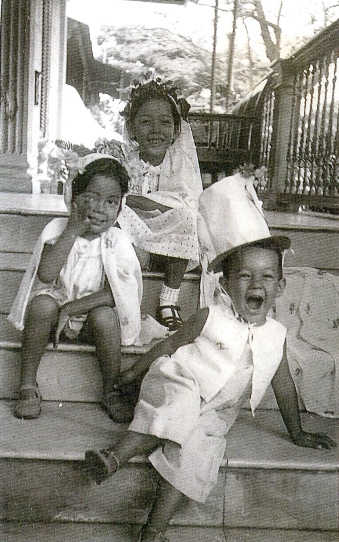 When the Tropenmuseum announced, through the media, that it was looking for people who might have lost photo albums during World War II in Indonesia, I immediately thought of my mother. The museum’s archives stored many of these albums, and it was hoping that the albums’ owners might come to retrieve them.

We had lost many of our childhood photos. During that time we lived in Surabaya, which was a Dutch-East-Indies naval base and thus strategically important. Shortly before the Japanese invaded Indonesia, my father had predicted that Surabaya would be target due to its strategic location. He thought it was better to leave the city before the invasion, so we sought refuge at my grandmother’s house in Sidoarjo, a small town in the northern coast of East Java. My sister Wen, my brother Kung and I each took a suitcase with us filled with medicine and clothes. We were also allowed to take our favourite toys with us, and mother each gave us our baby scrapbook.

In fact, the Japanese did not invade Surabaya, but instead came like thieves in the night through the eastern coastal towns. Following the Japanese invasion, some local people started plundering. We made a narrow escape by climbing over the backyard’s fence and hiding in the klenteng (Chinese temple). When calm was restored we returned to grandmother’s house, which was left in a mess. Our valuables were stolen, as were our small suitcases with our scrapbooks. My mother said the loss of the photo albums was the worst thing that had happened to us.

Some weeks later, my grandmother told us that she had found various parts of our family altar at the market, and had bought them back. Encouraged by this discovery, my mother walked through a number of markets in search of our photo albums, and her efforts were rewarded. We were able to retrieve part of our childhood photos, or better said: we bought them back.