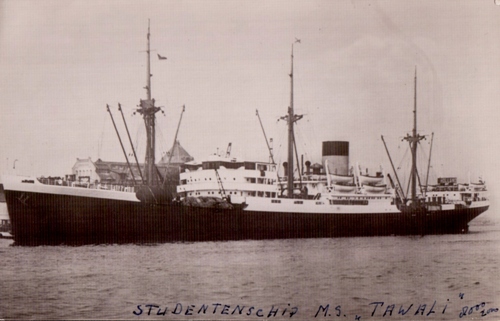 There was great demand for passage to the Netherlands from the Dutch East Indies/Indonesia after the Japanese occupation ended and the Republic of Indonesia was proclaimed. As their education was interrupted during the years of occupation, many young people made efforts to overcome the lag in their education in various ways. In regions under Dutch administration, such as in the major cities of Jakarta, Bandung, Semarang and Surabaya, they were able to continue their education in the Dutch secondary schools which had reopened. In regions controlled by the Republic of Indonesia, Chinese scholars and advanced students arranged refresher courses for secondary education, enabling the pupils to continue their education at the Dutch secondary schools at a later date. In Yogyakarta in 1946, the Chung Hua Pu Hsi Hsueh Pan provided such courses.

There were many graduates who wished to further their education in the Netherlands after acquiring their Dutch secondary-school diploma. Passenger liners such as the MS Oranje and the MS Willem Ruys could not meet the increasing demand for passage. In response The Netherlands Steamship Company decided to convert the cargo hold of the freight ship MS Tawali to accommodate passengers. The students could sleep in hammocks.

Along with many young students, I left aboard the MS Tawali which departed on 15 July 1949 from Tandjong Priok, the port of Batavia, and made the passage to the Netherlands. Among these students were many Peranakan Chinese and a small number of Indonesians. Most of them had a secondary school diploma, such as a 5-year HBS 3-year AMS diploma , formerly superseding a MULO education. One had a diploma from a British secondary school in Singapore, while another from a Chinese school (Kao Chung Pi Yeh). One passenger, Liauw Sian Tek, was in his 5th year of HBS in Bandung just before the Japanese invasion in 1942. For this reason he received an emergency HBS diploma without taking his final examinations. After studying law at the Law School in Batavia in 1948-1949, he sailed on the MS Tawali to continue his studies in Dutch-Indian Law in Leiden.

From Tandjong Priok and after calling in at the ports of Belawan Deli and Medan on Sumatra’s east coast, the ship continued across the Red Sea, the Suez Canal, the Mediterranean and the North Sea to the Netherlands. On 17 August 1949 the journey ended at the Javakade in Amsterdam. Student life then commenced.