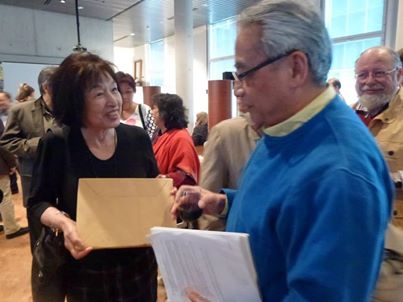 After the KITLV (Royal Netherlands Institute of Southeast Asian and Caribbean Studies) general assembly meeting on June 12, 2013, in Leiden’s Ethnology Museum, Mr. Westa Kwee handed over a book about the Djie family to CIHC’s Patricia Tjiook-Liem.

Westa Kwee is part of the Djie family through his wife Chen Chu Djie, and is actively involved in the family’s genealogy. Djie family members from all over the world had come together in Xiamen in April 2012 for a five-day family reunion. The reunion gave the chance for family members to get (re) acquainted, and for the group to visit clan villages in Beimen and Shanmei.

The book, titled ‘The Djie Family Reunion, Xiamen, China: Piercing together the past and present’, also describes the family’s history in China and Indonesia. It also contains short biographies written by various family members.