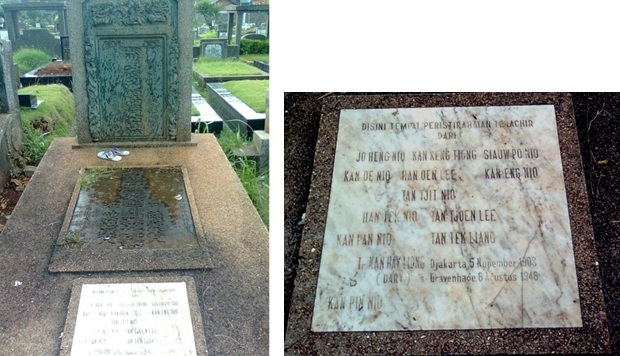 These two photographs, which are on Facebook, were recently brought to my attention. The second photo is a detailed enlargement of the first photograph. The photographer apparently noticed something unusual about the gravestone, as it is not common to have 13 people in one tomb. A mass grave?
This grave is a silent witness of the Indonesian government’s indifference towards the Chinese minority in the 1960s.
It all began one afternoon in 1962 when my mother received a phone call that bulldozers were about to flatten the graves of our ancestors. Our ancestors had been buried ‘for eternity’ on land which belonged to our family.
“What do you mean? Aren’t those graves on private property?” was my mother’s logical reaction.
The answer was plain and simple: “It may have been private property, but it has been dispossessed. You will receive official notice about this shortly. In the meantime it is important, should you want to preserve the graves with their content, that you fetch them immediately.”
The ‘Jakarta Bypass’ project was in the planning, and it would go right through our property. This prestigious project had to be finished for the fourth Asian Games held in Jakarta from August 24 to September 4, 1962. With a lot of effort, we got a week’s extension.
For environmental and hygienic reasons, we cremated our ancestors. The next step was how we could preserve those remains in such a way that there would still be a gravesite to honour our ancestors, and the rituals that accompany Ching Ming (1).
By chance, there was an unfinished plot belonging to H.H. Kan and his wife for their son Dary Kan Hay Liong. This site was covered with concrete tiles with handles. The tiles were meant to be replaced with a proper tombstone. Thus, this plot became the common grave for our ancestors with the rescued ‘Bongpai’ (2) as its tombstone.

(1). Ching Ming is the celebration of graves, and is commemorated on the third day of the third month, or 100 days after the winter solstice. On that day, ancestors’ graves are visited and cared for, and foods and other offerrings are put on the graves.
(2). Bongpai is the tombstone of a Chinese grave.