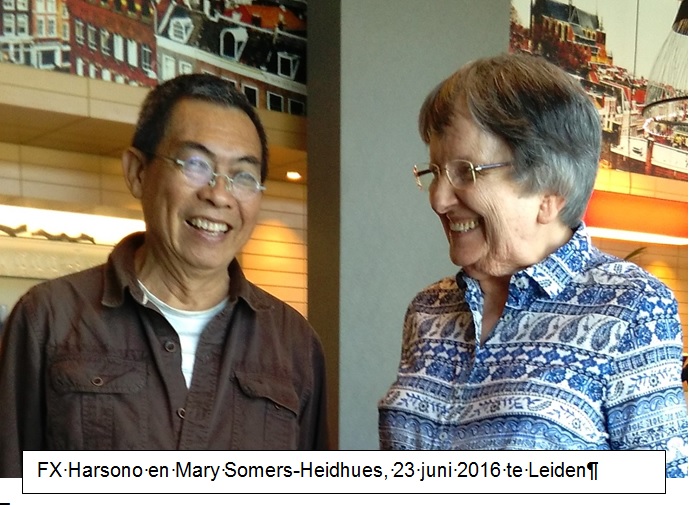 Mary Somers Heidhues, an American pioneer in the research into Peranakan Chinese in South-East Asia, in particular Indonesia, visited Leiden to give a lecture at the Open Day of the Chinese Indonesian Heritage Center (CIHC).
Coincidentally FX Harsono, a visual artist well-known for his art installations exposing the persecution of the Chinese in Indonesia in the period of 1948-1949, was in the Netherlands for the Sonsbeek ’16: transAction exhibition (June-September 2016), which was curated by the Indonesian artists’ collective Ruangrupa.
The CIHC arranged for the researcher and the artist to meet and they found common ground in their area of expertise. Harsono is familiar with Somers Heidhues’ publications and she is an admirer of his work. As incidentally she had planned to start her presentation on the CIHC event with a picture of Harsono’s artwork Ranjang Hujan (The Raining Bed), she smilingly asked the artist for his approval, which he gave happily.

The Raining Bed is an installation depicting a traditional Chinese bed where a poem was rendered in ceramic letters. It symbolizes ‘history washed away’. The artwork is a fitting metaphor for Somers Heidhues’ lecture on the period between 1945 and 1988, when the Chinese population in Indonesia was politically as well as economically oppressed, and attempts were made to erase their cultural heritage. At the end of her presentation Somers Heidhue emphasized that in the past decade the Chinese have seized the opportunity to stand up for their identity.