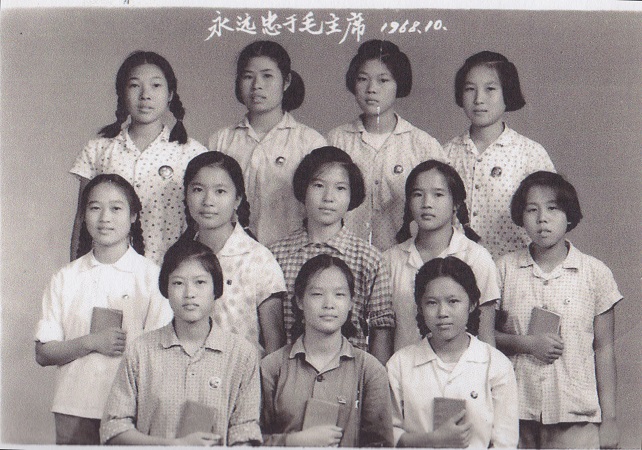 Inge Njoo-Kwee, second to left in the middle row. This photograph was taken after we returned from ‘the long march’. Above it is printed: ‘Eternal loyalty towards Chairman Mao’.

In 1965 we were placed in secondary school no. 3. Free choice was not a possibility in China: the school chooses its pupils. Less than half a year after we started there, the Cultural Revolution started.
Pupils in our school were automatically grouped in two categories:
– pupils with a proletariat background, who felt superior towards the others.
– the remaining pupils, i.e., ones with capitalistic backgrounds: the ones dubbed ‘children of the devil’.

Teaching was suspended. Throughout the whole country, students and pupils were called up to travel across the country, by train or on foot. As traveling from one city to another was not commonplace at that time, this seemed like a good opportunity to visit other places.
We had to register in order to take part in this programme, and we received a monthly ransom for 15 kg of rice and 10 yuan. Our group of 12 people decided to go from Nanning, where we lived, to Chang Xa by foot: a distance of a thousand kilometres! This was to get into the spirit of Mao, who walked from one place to another with his troops to free the paupers. Throughout our journey, there were resting points where we could stay overnight and get food.
One month after our departure we arrived in Gue Lin, and received shelter on the campus of Gue Lin University. We had gone through our food stamps, so we had sent one of our classmates home to organize food for us. He took our food stamps and money, but did not return. Later on we heard that his father had committed suicide. After making a lot of fuss, we finally received more food stamps and money, and the journey was able to commence.
However, together with another friend (on the far right in the middle row on the photo), I decided not to continue the voyage. We stayed over at my parent’s friends, who had also come from Medan. Later on we travelled back to Nanning by train.

Shortly after the photo was shot, we heard where we were expected to go. Going to school was no longer an option for us. Instead, we were allowed to work as farmers on the countryside. Most pupils were sent to far-off places.
I, together with the girl on the far right in the upper tow, was stationed in a fruit farm not far from school – and thus not far from home. Apparently this was the privilege of being an overseas Chinese.

Inge Kwee was born in Indonesia. When she was eight years old, she emigrated with her family to the People’s Republic of China. She lived there until she was 17.