Chinese Indonesian Heritage Center > Snapshots with Stories > 29 – My emigration from Indonesia to Surinam, 1969-1974 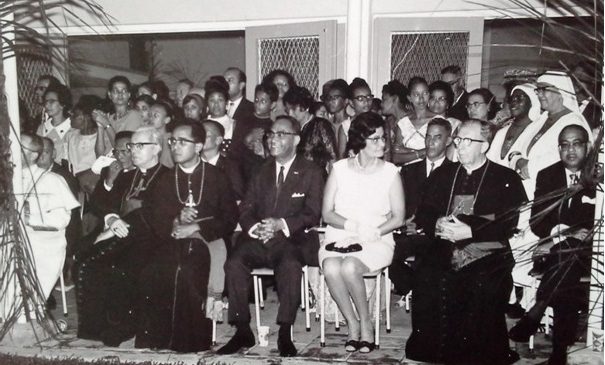 Second from left: Mgr. A.F. Zichem, bishop of Suriname. To his right: J.A.E. Ferrier, governor of Suriname, and his wife.

I left Indonesia at the end of February 1969* and went to Suriname to find work and a place to live. My family, my wife (Whie Kie Lian Nio) and my children (August Tan Swan Hock, Agaath Tan Swan Ing and Ancilla Tan Swan An) came five months later. It was a daring leap of faith, for I knew nothing about Surinam. My friends ridiculed me for emigrating to a developing country; Why didn’t I go to America, Europe or Australia?
After 5 years, in April 1974, I traded Surinam for the Netherlands, where I live with my family until today.
These photos show some events we attended during our time in Suriname. To raise extra income, my wife and I did freelance work as press photographers and offered many of our photos to news-papers in Paramaribo. Being a new immigrant I felt privileged I could attend those events. It’s a privilege I wouldn’t have had in Indonesia and I felt like a first class citizen in Suriname.

Whie Kie Lian having a conversation with Suriname’s prime-minister Arthur Joan May and his wife, at the August 17 celebrations which was held in the residence of the consul-general, Bambang Sy-oto Sapto Dewo, on Van Brussellaan in Paramaribo. As holders of Indonesian passports we felt obligated to contribute to the consulate-general’s events, all of which we attended. Thus, we be-came acquainted with many officials in a short time.

From left to right: Mgr. Zichem, Mrs. Oey-Han from Jakarta, Mrs. Ong from Malang, Jessy Kwee Hwa Nio from Surabaya. Mr. Nimwegen. After being installed as bishop, Mgr. Zichem visited us at home, on the Kwattaweg 37A. It is much less formal here than in Indonesia or in the Netherlands. After 50 years of marriage, Kie Lian died of cancer. Later, Jessy was to become my wife. Mr. Nimwegen, a guest from the Netherlands, was the brother of Father Herman van Nimwegen, in-spector for Roman Catholic education in Surinam. In Indonesia I wouldn’t have been exposed to such special occasions.

From left to right: Mrs. Pasaribu, Mrs. Natadiningrat, Mrs. Bambang and Whie Kie Lian.
During Mr. Taswin Natadiningrat’s (Indonesian ambassador to the Netherlands) visit to Surinam, his wife busied herself with visits to an orphanage, a medical rehabilitation center, etc., and, most importantly, to the Javanese community, to show support, as it was at a disadvantage compared to the Hindustani’s and the Creoles communities.

* Tan Hoo Lam emigrated to Surinam because of the precarious political situation in Indonesia, ed.
He passed away in November 2015