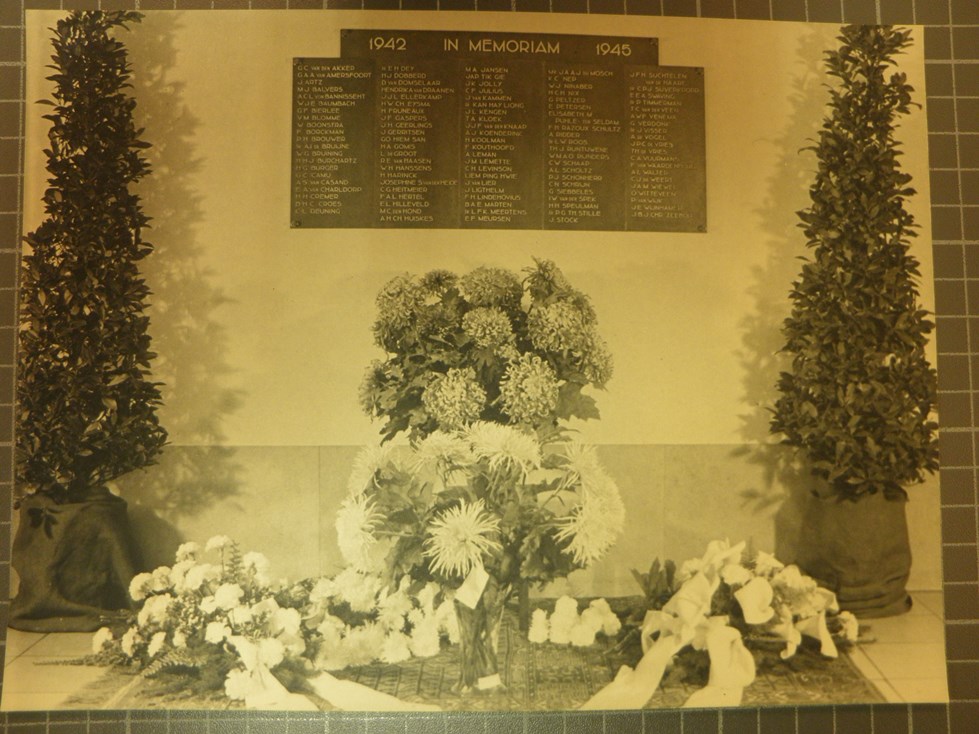 These two photographs were taken in 1956 or 1957, during the official inauguration of a plaque commemorating the deceased ANIEM members in the Netherlands East Indies. The plaque was installed at the ANIEM (Algemeen Nederlandsch Indische Electriciteits Maatschappij, or the Netherlands East Indies Electric Company) headquarters on the Keizersgracht 369 (at the time the number was 515) in Amsterdam.

With these photos and the story behind them I attempt to bring forward historical information which has until now been doomed to oblivion.

We first heard about the name General Demolition Squad (Algemeen Vernietigings Corps) from an employee of the Second World War Deceased Foundation (Stichting Gevallenenn 2e Wereld Oorlog), after we had sent him the list of names on the plaque. He recognized several names as members of the Demolition Squad. The Squad’s name came up again in the project Indonesian Oral History Foundation of the KITLV (Royal Netherlands Institute of Southeast Asian and Caribbean Studies).

According to Tan Eng Swie (is this the employee of the Stichting Gevallenen 2e Wereld Oorlog?), technicians were recruited for the Squad from employees of all large corporation in the Netherlands East Indies. They were then made to destroy all the infrastructure in areas that were to come in the hands of the Japanese after the KNIL (The Royal Netherlands East Indies Army) retreated. Tan’s father was made to blow up bridges, and my uncle Kan Hay Liong, an electrical engineer, had to disable power stations.

The Dutch East Indies government was silent about this Squad, as recognizing it would imply admitting defeat. Even after the Japanese surrendered in 1945, the Squad was never mentioned and it fell into oblivion. Thus, it was never known that the Chinese in the Netherlands East Indies were ever in the resistance movement. My uncle managed to stay out of trouble until 1944, but was betrayed and captured in 1944. In jail he refused to collaborate with the Japanese, and did not want to participate in repairing a floating dock for the Japanese, or blowing up the port of Balikpapan when the Allied Forces were about to capture the area. Because of this he was treated harshly in prison, and kept in isolation cells. The Indonesian prison guards also put gravel and bamboo splinters in his rice.

Currently, it is not known where the plaque with the names is stored. Search for the plaque has not borne fruit until now, as the ANIEM headquarters had been rebuilt into an apartment complex.