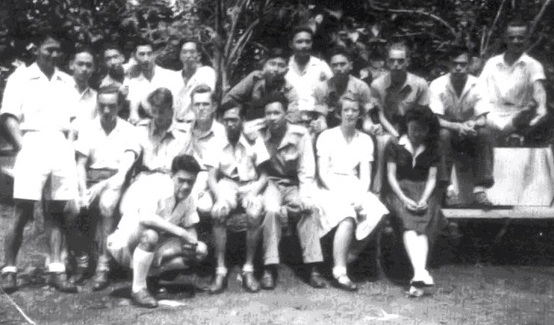 In 1945, right after World War II, the Christelijk Lyceum (Christian High school) in Bandung was one of the first institutes offering the opportunity to continue a Dutch high school education.
During the Japanese occupation 1942 – 1945 the Japanese removed Dutch colonial influence by closing down Dutch high schools. I therefore could not continue my education at the Christelijk Lyceum. After the surrender of the Japanese, Dutch administration offered us the opportunity to make up for the time lost during the war by shortening the high school curriculum from five to three years. Then forty percent of the class of 1948 proved to be Chinese Indonesians which high percentage was inconceivable before the war.
Before 1942 Dutch administration admission policy for non-Dutch students were extremely severe. For Chinese Indonesian students to be admitted to a Dutch high school usually meant that they came from families who were either Dutch-equated or well-off. In 1941 I was the only Chinese Indonesian freshman in my class of 30 students. My mathematics teacher was Ir. Manusama, who later became the President of the Republic of the South Moluccans.

No doubt World War II brought us a lot of misery. Yet there were also opportunities, which before the war did not exist for a Chinese Indonesian student. Right after the war we were given the opportunity to choose the semester we like to continue our High School education without submitting any official proof of capability. Since I had – illegally – taken private lessons in mathematics and foreign languages during the war I decided to try the senior program and just hope I would make it. Fortunately I succeeded and was admitted with other Chinese Indonesian students in the senior class 1947/48. When in 1992 a fellow student of class 1948 in Australia sent me the photo of class 1948, it triggered my curiosity to learn what has really happened with the careers of my Chinese Indonesian fellow students. It turned out that all of them were quite successful in business or professionally.

Pwa Kiem Liang :
lives in the Netherlands right now. Unfortunately I don’t have information about him, but I’ve heard tha he is doing well.

Lioe King Djoe :
engineer and director/owner of a big electrotechnical company in Indonesia.

Harry Kho :
director of Coca Cola Bottling in Jakarta and also co-owner of the biggest babyfood company in Indonesia.

Lionel Tan :
economist, CEO of the Petrochemical company in New York; after his retirement until now he is Commissioner of Go-Tan BV.

The Gwat Lan :
is a famous dentist in Surabaya.

I wonder whether these successful careers of the Chinese Indonesian students of class 1948 are matters of coincidence or have the need for recognition of their identity motivated them?
Maybe a “Food of Thought” for CIHC …