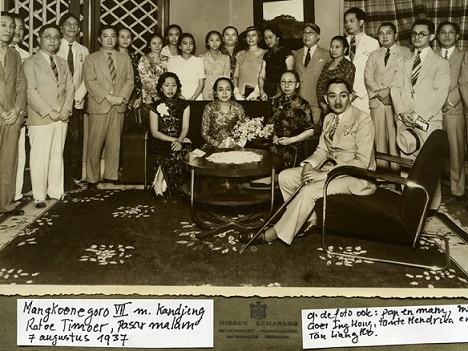 This photograph comes the Tan Tek Peng family, who are my in-laws. It was taken on August 7, 1937, on the event of the Pasar Malam in Semarang. Seated on the chair, looking somewhat dreamy and removed, was a Javanese Sultan from Surakarta (Solo): Mangkoe Negoro (he who has the world on his lap) the 7th. Seated on the sofa on the left was my mother-in-law Leontine Tan-Souw (Mrs. Tan Tek Peng), with her typical why-is-this-happening-to-me look. Next to her was the queen Kandjeng Ratoe Timoer (empress of the East), and on her right was grandmother Goei Ing Hong (whose husband was the brother of my grandmother Thio-Goei). Grandma Goei was the eldest daughter of Surakarta’s Chinese Major Be Kwat Koen, and had been elevated to the rank of Dutch knighthood (Ridder in de Orde van Oranje Nassau) due to her social activities.

Standing confidently next to my grandmother was my father-in-law Tan Tek Peng, director of the Kian Gwan trading company belonging to the Oei Tiong Ham concern. Behind grandma Goei stood her younger sister Hendrika, wife of Oei Tjong Hauw. The latter was president director of the Oei Tiong Ham concern, which made him my father-in-law’s boss. Standing fourth to the right was Tan Liang Hoo, the secretary of the Pasar Malam Association and a relative of ours.

Standing directly behind Mrs. Tan Tek Peng was Siti Noeroel, daughter of the Sultan, and her two cousins. The man wearing the turban, sixth from the right, was Patih Sarwoko, the prime minister to the Sultan. The European woman wearing a hat, standing in the middle, was the Sultan’s secretary. Behind the secretary to the left was Mrs. Sarwoko.

Semarang’s Pasar Malam Association was part of the local traders’ association. Given his prominent position given to my parents-in-law on the photo, it was likely that Tan Tek Peng was chairman of the traders’ association, which made him the host to the Sultan.
According to family stories, I believe our family maintained a warm relationship with the four Javanese Sultanates (1). Mangkoenegoro stayed over several times at Goei Ing Hong’s home, as did the Soesoehoenan of Solo. Regular contact between the two sides may also be due to the fact that great-grandfather Be Kwat Koen was Chinese Major in Soerakarta.
To me, this photograph exudes the atmosphere of harmony or “roekoen”. An atmosphere of fellowship and unity characterises the Javanese and Chinese elite of Central Java.