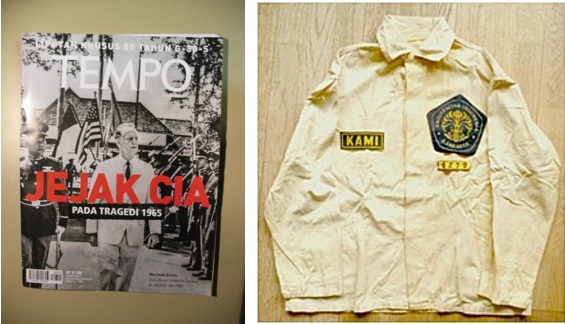 While reading the special issue of Tempo magazine about “50 years after G-30-S (the coup of 1965)” – with the main theme of “traces of the CIA in the 1965 tragedy” – memories of my student days at the University of Indonesia (UI) came flooding back.

After the coup of 1965, Jakarta became a stage for demonstrations by university and secondary school students against the Indonesian Communist Party (PKI), which was accused of murdering six generals. The biggest group was from UI. While demonstrating, the UI students would wear their yellow alma mater jackets. Slowly but surely, the anti-PKI demonstrations became a pointed rally against Sukarno and the PKI.
Tempo described one CIA involvement in the article “The False Jacket from Hawaii.” The article described how the “yellow Alma Mater jacket” of the University of Indonesia was imitated in Hawaii, made out of parachute material, and flown down from Hawaii with a Hercules aircraft to Indonesia. These fake jackets were disseminated to demonstrators – those who were not UI students – on the streets in order to mobilize greater numbers of people for the anti-Sukarno rallies. These actions were part of a larger operation of the US, UK, Germany and Australia to get rid of Sukarno, as described in the other articles in this special edition of Tempo.

Because of the article on the fake jackets, I remembered that my yellow UI jacket suddenly had to be handed over to the university so that a number could be stitched on it. I found this odd, and was against it as an individual could be tracked down easier during a demonstration. One also looked like some kind of jailbird walking around with a number on one’s jacket. Finally, I was persuaded by a fellow student, whose task was to maintain order during rallies, who said that the numbers were meant to counter infiltration by bad elements. Thus, the number came on my jacket.

I thought this would be a good narrative for the column “Snapshots with Stories”. However, it was easier thought than done: I was sure that I had taken the jacket with me from Indonesia. But where was it? After an extended search I thankfully found the jacket.

After the 1965 coup I experienced numerous demonstrations. The demonstration I remember most clearly was one where Sukarno’s supposed ‘palace guards’ shot into the crowd. While running away, I tripped over a wounded demonstrator. Without thingking, I dragged him towards a ditch surrounding the Merdeka Square at the time. My clothes became muddy and bloody due to the action.
My father had been staying at home after he was fired as a civil servant in 1964, more than a year before the coup, because he refused to become a member of the communist civil servant organisation. He was fired because he was a “counter revolutionary.” As a result, our family had no income, and thus no money for household help. At first my mother did the laundry, but due to stress and bad nutrition she suffered from recurring tuberculosis. Thus, my father began to help with the laundry.
My mother’s stress was due to multiple factors: one thing was my father’s removal from his job, followed by anonymous threats to the family such as “all counter-revolutionaries will be crushed” (a quote from a speech by Sukarno). But even before my father lost his job, my older brother was already arrested and jailed without any legal process, apparently because somebody overheard him making negative comments about Sukarno.

In hindsight we could say the following:

– That the shots were not fired by Sukarno’s ‘palace guards’ but rather by Suharto’s troops who were holding Sukarno captive in his palace.

– That this incident was most likely initiated to discredit Sukarno. This may very well be the turning point in Sukarno’s popularity, so it became easier for the MPRS (Temporary People’s Consultative Assemby, the country’s highest legislative body at the time) to remove him. MPRS consisted of the same people that were there prior to the coup, minus members of the PKI. Notably, the same legislative body had named Sukarno president for life only a few year prior to this.

– That I am still amazed about the route that bullet, which struck my fellow student, took: after all, the student stood behind me.

The yellow jacket became the symbol of the student rallies against the communists and Sukarno. After Sukarno was removed from office, I continued to wear the jacket as a precaution. After all, the pogrom against the Chinese outside of Java, which already started in early October 1965, started rearing its ugly head in Jakarta in 1967. These purges became worse after a Suharto official declared that all Chinese were communists. With this statement, suddenly all Chinese were targets, including those who were non-communists. You could be beaten up on the street simply because you have slanted eyes. If you were Chinese, your house could be looted or torched, and the police would do nothing. Or you could be picked up from your house, taken to an unknown destination and never be seen again. There were calls from the mosques’ loudspeakers to annihilate the Chinese invidels, who have always been suspect to begin with. It was so dangerous for Chinese-looking people at that time that even Moslem students who could pass as Chinese were wearing yellow jackets for their personal safety.